If your estimates match those of the average respondent in Dan Ariely and Mike Horton’s survey, you guessed that the top quintile has 59 percent of the wealth and the bottom two quintiles together make do with 9 percent. That is a lot of inequality. But it isn’t close to the actual disparity.

In reality, the richest 20 percent hold a whopping 84 percent of the wealth and the bottom 40 percent have only 0.3%.

In a recent blog post in the Atlantic, Ariely discusses this survey and draws some lessons from the data. The first — “we vastly underestimate the level of inequality that we have in America” — is a point worth holding onto. Americans apparently have very little grasp on the extent of wealth inequality in our polity. But Ariely falters when interpreting respondents’ answers to questions about the amount of equality they would like to see in their own country. Here is a summary of how the national pie is divided up in reality, in the estimation of the subjects, and in the subjects’ ideal society. 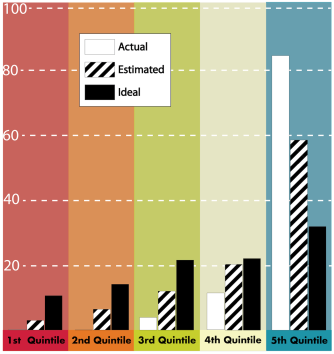 Perusing this graph may incline you toward Ariely’s second conclusion:

[W]e want much more equality than both what we have and what we think we have. Apparently, when asked in a way that avoids hot-button terms, misconceptions, and the level of wealth people currently possess, Americans are actually in agreement about wanting a more equal distribution of wealth. In fact, the vast majority of Americans prefer a distribution of wealth more equal than what exists in Sweden, which is often placed rhetorically at the extreme far left in terms of political ideology — embraced by liberals as an ideal society and disparaged by conservatives as an overreaching socialist nanny state.

This conclusion is problematic. Americans may love IKEA’s Swedish meatballs, but they are not interested in adopting Swedish social democracy, whatever its virtues may be.

I unpack and critique Ariely’s argument in a post on the Economist blog today. I also argue that Ariely misunderstands John Rawls, the political philosopher whose theory of justice provoked his experiment. Equality is a crucial political value, but it isn’t the only value, and pie charts cannot be evaluated without a broader understanding of what brought them about.

The Portrait of a Lady, in Fifty Shades of Grey

With the Fifty Shades of Grey trilogy topping bestseller lists worldwide, it is now fair to argue that the best and worst novelists in the English language share a last […]