A few days ago I got into a Twitter discussion with The Guardian’s United States finance and economics editor, Heidi Moore, about inequality and growth. My main point was that inequality hurt growth by preventing the economy from allocating opportunities to the people best able to exploit them; rich stupid people would get more chances than poor smart ones. But as I was making that point, this happened: 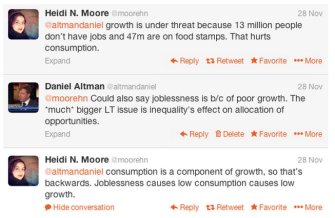 I was a little surprised by this exchange. In the past few years, you didn’t have to look far to find some very smart people talking about how much economic growth is needed to create jobs. Others spoke about a “jobless recovery”, where growth happened without any increase in employment. And yet here was another very smart person saying that they all had it backwards – jobs created growth, and not the other way around.

The fact is that it can go both ways, and the cycle can be self-reinforcing. Heidi’s view was that jobs provided people with income, income begat consumption, and higher consumption (as a component of gross domestic product) meant growth. She’s not wrong – at least in principle – but growth can create jobs as well.

It wouldn’t have to happen right away, though. At first, companies might simply ask their existing workers to put in more hours or effort. With more labor going into the production process, the economy could still grow without adding jobs. Eventually, if the rise in consumption were sustained, people might get tired of working overtime; then companies would have to hire more. But economic growth would have preceded the uptick in employment.

This is just one example. Increased demand for goods and services can come from greater government spending, more purchases of American exports, or even private investment in a new industry. Regardless of the impetus, companies don’t always hire right away. Growth often comes first, and then, once it continues for a while, firms finally make the decision to hire.

Looking at some data confirms this story (note that the growth rates in this chart aren’t annualized like the ones in news headlines): 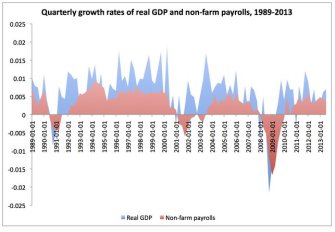 In the past several recessions, economic growth has returned before employment; the blue area has become positive before the red area. But even if jobs don’t restart growth, could lower employment cause a recession, as Heidi suggested? It doesn’t seem to be the case here. Jobs and real gross domestic product fall at about the same time going into each downturn.

A Laser Strike at the Galactic Center

Astronomers at the Very Large Telescope(VLT) in Chile are using this laser to measure the distortions of Earth’s ever changing atmosphere.