I’ve never been pregnant myself, but I know people who have. Pregnancy can be a wonderful experience, but it has its downsides too, like having to feel bad whenever you have beer or wine or sushi or coffee or even a ham sandwich in front of your jealous pregnant wife, for whom all these things have been medically proscribed (for the record, I hear that morning sickness and protracted labor are no picnic either, not to mention not being able to eat most things at said picnic). 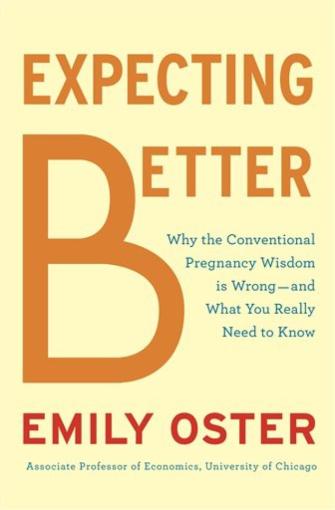 The good news is that many of the forbidden foods and beverages on that list don’t necessarily belong there. A new book by University of Chicago economist Emily Oster takes a look at the research behind everything women are told they can and can’t do during pregnancy and crunches the numbers. You still can’t light up a cigarette, but small amounts of alcohol after the first trimester are back on the table, as are most deli meats (consider avoiding turkey). You can read a couple of excerpts of the book and a brief interview to get more details, or better yet, buy the book, which came out on Tuesday (full disclosure: Emily is a good friend of mine, and my wife and I relied more heavily on Emily’s research than on our doctor’s advice. I even make a couple of appearances in the book, as does my wife Jane).

My favorite piece of data-driven deconstruction of the conventional pregnancy wisdom is the story behind why women have been told to stop drinking caffeinated coffee, which may not seem like the world’s biggest sacrifice, but it’s a lot to ask of someone when there’s no good reason for it. On the surface the data seem dire – women who drink caffeine are more likely to miscarry than those who don’t. But as you may have heard, correlation is not causation; this is a good example of why we have that saying. It also happens to be true that women who experience no nausea during pregnancy are more likely to miscarry than women who do. The nausea-having women cut down their coffee consumption, the nausea-free women, who are already more likely to miscarry, don’t. So it seems like the caffeine isn’t causing the miscarriages at all. The argument gains even more strength when you consider that tea – which is also caffeinated but much easier on the stomach than coffee – has no effect on rates of miscarriage. And the clincher: reducing coffee intake, even if you’re still consuming some (which is exactly what you’d do if you were feeling nauseous) reduces miscarriage as well. So when you look into the data it turns out that women can still have a cup or two of coffee without harming their babies – although there’s a decent chance that nausea may make coffee an unappealing option.

What’s particularly interesting to me, as a psychologist, is that when it comes to pregnancy, women (and usually their husbands and families, too) don’t seem to show the same patterns of motivated reasoning that people usually do when it comes to medical risks. When considering their medical risks – actually, when considering just about anything – psychologists find that people are unreasonably optimistic. Tell them that a study shows that the coffee they drink every morning is good for them and they drink it up; tell them the same study says coffee could be harmful and they tell you not to believe everything you read. Since Neil Weinstein first started measuring back in the eighties, people have been reporting being less vulnerable than the average person to just about every disease. Skin cancer? Not me! Diabetes? I don’t think so! And yet, when it comes to pregnancy, things seem to change.

My impressions are personal and anecdotal, but in my experience expectant parents are anything but dismissive of potential risks to their pregnancy. If anything, they often exaggerate risks and transform minor symptoms into major concerns. My wife and I bought an inexpensive fetal Doppler machine that would let us hear our baby’s heartbeat. Big mistake. The idea was that we would be able to listen to our baby’s heart beating to reassure ourselves that everything was fine if we were ever concerned. Instead, we wound up driving ourselves crazy when we couldn’t get the machine position correctly and all we could hear was ominous static.

So what’s the difference? Why do risks seem to loom so large in pregnancy and not at other times? Perhaps it is because potential bad outcomes seem so bad that we simply cannot neatly rationalize them. Perhaps it is because feelings of responsibility and potential guilt, and regret are heightened when thinking about one’s baby. It is one thing to risk your own health and safety when you smoke a cigarette or sunbathe without any lotion, but it feels entirely different to take risks on behalf of your baby. Whatever the specific reason that pregnancy seems to have this effect on people, it’s not unique to pregnancy. There are other instances in which people’s unrealistic optimism shifts quickly to hypochondria and, as far as I know, psychologists don’t yet have a satisfying explanation for what causes this change.

The Netflix show about a Birmingham crime family and their personal demons concluded earlier this month.
Up Next

This image is a collage of more than 1,400 images shared by people on Earth who “waved” back to Saturn.