This post originally appeared on the Newton blog on RealClearScience. You can read the original here.

Like peas and carrots, Coca-Cola and polar bears were meant for each other. Since 1993, the soda company has driven this notion home each winter, releasing adorable and fuzzy advertisements that radiate joy and warmth despite the arctic chill on screen and — for many viewers — outside.

But as heartwarming as those advertisements are, they cannot breeze by the cold hard facts. Coca-Cola is lying to you about polar bears!

Nowhere is this more apparent than in their 2013 critically acclaimed short film, The Polar Bears. Produced by the venerable director Ridley Scott, it lovingly depicts a family of polar bears suffering through a bout of sibling rivalry and daddy drama before, of course, reaching an “awwwwww” inducing conclusion.

Now, before playing the scientific Scrooge, I’d like to say that I really enjoyed the film! It’s innocent, spirited, and tender — something to show to your kids this holiday season. But it’s also woefully inaccurate. (Spoilers to come.)

But less obvious is the fact that polar bears don’t group together. The film shows a host of polar bear families forming some sort of community similar to the lion pride in Disney’s The Lion King. They do nothing of the sort. In general, polar bears live very solitary lives, wandering the Arctic in search of food. Though adult males are occasionally known to form “friendships” with each other.

Another inaccuracy is the presence of the younger sister, Kaia. She’s absolutely adorable, but she also shouldn’t exist. In reality, the mother, Sakari, would never have another cub until her older children — brothers Jak and Zook — had left. Polar bear mothers usually abandon or drive off their cubs when they reach two and a half years of age. 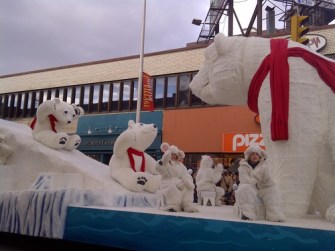 The third and largest inaccuracy in the film is the relationship between the father, Kaskae, and his cubs. Rather than acting as a stern, but doting dad (as he is depicted), in reality Kaskae would be long gone, and if he returned, he might even eat his children. Once a male wins the right to mate with a female, often through intense and bloody competition with rivals, he remains with her for about a week, during which time the two mate repeatedly. But after the week of loving, the male skedaddles, leaving the pregnant female to fend for herself. Such is love in the frigid, unforgiving Arctic. The harsh environment has also been blamed for cannibalism and infanticide. When food is scarce, adult males have been known to prey upon cubs.

Coca-Cola is by no means the first company to ignore inconvenient animal behavior facts, so we shouldn’t be too hard on them. To Coke’s credit, they do support polar bear research and conservation efforts, pledging two million dollars over five years via the Arctic Home project to “define a place where polar bears and people can thrive in the Arctic.” In addition, the company has reportedly “raised over $3 million to date in consumer and matched donations for the project.”

Cats know more than they let on.
Up Next