Humanity is currently using 1.5 Earths. Everybody knows that. Our ecological footprint is unsustainable, and if we don’t do something about it, we’ll soon find ourselves in a world of hurt.

But, according to a team of environmentalists led by Linus Blomqvist of The Breakthrough Institute, that ubiquitous, guilt inducing statistic is oversimplified and very likely wrong. Blomqvist and his coauthors detail their arguments in Tuesday’s release of PLoS Biology.

“Ecological footprint measurements, as currently constructed and presented, are so misleading as to preclude their use in any serious science or policy context,” he says.

Blomqvist, a dedicated, yet pragmatic conservationist, recognizes that any overarching global environmental metric won’t be perfect. The Global Footprint Network (GFN) originally devised the ecological footprint metric decades ago. The overall value is derived from gauging the ecological supply and demand of six different components: cropland, grazing land, forest, fishing ground, built-up land, and carbon footprint. Everything makes sense at first glance, but delve a little deeper and problems with their methods and the resulting “1.5 Earths” statistic become apparent.

According to GFN’s own data, every single component is either very close to in balance or is in surplus, except one: carbon footprint. That category alone is responsible for the deficit that gives rise to the idea that we’re using 1.5 Earths. 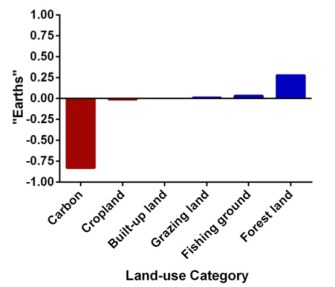 “Indeed, if one excludes carbon, global biocapacity exceeds the footprint of consumption by about 45% in 2008,” Blomqvist says.

Blomqvist doesn’t question that we’re putting too much carbon into the atmosphere, but he does question whether or not the amount is equal — as the graph points out — to .85 Earths.

To calculate carbon footprint, GFN simply defines carbon uptake by forests as the single method to offset human greenhouse gas emissions. This makes the carbon uptake rate extremely significant — a tiny change can drastically alter the resulting footprint. The GFN currently estimates the rate to be 0.97 metric tons of carbon per hectare of forest per year, meaning that we’d have to plant dense forests on over half of Earth’s land to bring our ecological footprint into balance.  But in fact, forests’ global carbon uptake rate fluctuates each year, from as low as zero to as high as 6. If the value was simply altered to 2.6 — which is plausible — then the carbon deficit disappears.

Blomqvist and his team also take aim at other weaknesses of the “1.5 Earths” calculation. For example, the way the cropland and grazing land categories are formulated, they can never be in deficit. Humans decide how much land to use for agriculture, and we can’t technically use more than we create. Moreover, the GFN doesn’t even register declines in global forest area for their footprint calculation. If these shortcomings were corrected, our global footprint would very likely increase.

William Rees and Mathis Wackernagel, the scientists who originally created the ecological footprint statistic, disagree with many of Blomqvist’s assertions. They contend that their calculations are best put to use on a local or national scale, not a global one.

“There is nothing gained by not knowing one’s country’s biocapacity balance,” Rees and Wackernagel counter, “and there are presently no better estimates.”

Furthermore, they stand by their estimate of real-world forests’ carbon uptake rate, arguing that the rate is obviously insufficient to prevent potentially catastrophic warming.

“The carbon sequestration rate is not 2.6 or no carbon dioxide would be accumulating in the atmosphere,” they say.

Blomqvist and his colleagues offer recommendations for improving any sort of ecological measurement. Chiefly, it should take into account declining stocks of natural resources, include estimates of uncertainty, and illuminate diverse pathways to achieving sustainability. Planting trees, while worthwhile, is definitely not the only option to “using” one Earth instead of 1.5.

Terrified of blushing? You might have erythrophobia.
Up Next

If a Life Falls in the Forest and No One Is There to LIKE it, Does It Make a Sound?

Comes a time when you realize, you’re basically a straight-up Luddite, or at best the loyal opposition to the social media age, and you might as well embrace that and […]