The one thing you can count on in social science research is this: Inquiry will continue until the preferred hypothesis has proven to be true. Proponents for abstinence only sex education are no doubt celebrating new evidence that, on the surface at least, supports their belief. Before funders put their research dollars away, however, they might want to read the fine print first.

This study, published in the Review of Economics of the Household, finds that an increase of 1% per capital in spending on state abstinence education programs has the power to reduce births by 15-17 year old women by 0.04 births per 1,000 suggesting that the program offers very good value to the taxpayer – for every $50,000 spent four births were avoided at net savings to the public of $15,652 per birth.

That sounds like a pretty convincing economic case for not teaching youth ways that they can control their fertility (or, for that matter, how to prevent disease). However that isn’t really this paper’s conclusion.

We don’t know, for example, how many births might have been avoided for every $50,000 spent on programs that teach youths the variety of means available to prevent pregnancy and disease.

But that is not the only thing this paper doesn’t tell us.

To understand this, take a look at the graph below produced by the National Vital Statistics Report (June 20, 2012). It is obvious from this figure that the overwhelming majority of teen pregnancies are among women over the age of 17 and women who are either Black or Hispanic. 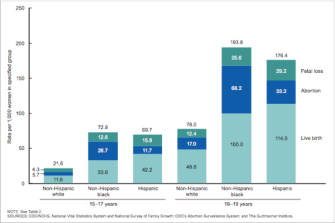 This research tells us nothing about the birth rate women over the age of 17 in response to abstinence program spending – just because it decreased pregnancies among younger girls does not imply that it hasn’t increased pregnancies among older girls – and even more concerning, it tells us the only population of younger girls impacted is white girls.

According to this evidence, there is no effect of abstinence program spending on the birth rates of Black or Hispanic girls who are between 15 and 17, and yet it is exactly these women who have seen their birth rates decline the fastest in recent years.

This not only calls into question the effectiveness of this program, but also the “net savings” figure above. That figure is only true if the average cost to the public of a teen pregnancy for a white girl is the same as the average cost to the public for all girls. If Black or Hispanic girls spend more time on public assistance following a teen birth, then that figure overstates the actual savings created by the program.

Birth rates for teen women have fallen dramatically in the United States over the past 20 years, with the majority of that change coming from declining birth rates among non-white women. If anything, this paper is proof that abstinence education can only explain a very small part of that trend and that policymakers need to keep looking for a solution.

I would like to offer a big thank you to Shoshana Grossbard who posted this article on her excellent Facebook page Economics of Love.

Colin Cannonier, 2012. “State abstinence education programs and teen birth rates in the US,” Review of Economics of the Household, Springer, vol. 10(1): pp 53-75.
Related
Starts With A Bang

Collective illusions — false assumptions about society that many people share — have existed for thousands of years in many different ways. Today, because of social media and modern technology, […]
▸
32 min
—
with
Todd Rose
Up Next
Technology & Innovation

The Justice Department maintains that Apple’s agreement with major publishers over how it markets e-books prevents its competitors from setting prices that would benefit consumers.