A seemingly unintentionally ironic paper has just been published in Science titled “A HUMAN RIGHT TO SCIENCE“. I presume it’s an important paper because the title is in BLOCK CAPITALS. That’s about all I can tell you about it though, because it’s behind a paywall.

A new acronym is going down a storm on Twitter this week, coined by @NeuroPolarbear. It describes this situation perfectly. So perfectly in fact, that I’ve added the term to urban dictionary, so we can all start using it. Hopefully one day, we won’t have to. 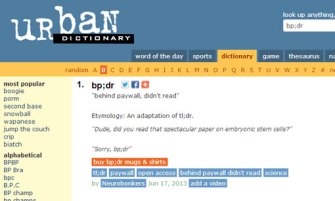 Who knows, it might end up becoming a slightly subtler version of #ICanHazPDF.

With the drop of a hat an authoritarian regime can redefine the word: “terrorist“

I think we should all take a moment to consider the news that everyone who continues to protest in Istanbul’s Taksim square is to be considered a terrorist. Let’s just […]