BEIJING/NEW YORK – The Chinese millionaire in green has struck again in New York City, the Washington Post reports, dishing out $300 dinner coupons to America’s homeless. He is a self-made superstar from the trash business (aka Renewable Resources Ltd.) who discovered philanthropy; a marketing genius, the “most interesting man in China,” easily, some say, the biggest Sino-US publicity stunt of our time. His Tencent Weibo account features an impressive 6,411,952 followers (as of today), while the master in return is following -none. The financial elites love this guy.

His ultimate aim, to be true, is everyone’s guesswork. Is it attention seeking, is it profitable, is it art? His choosing, ever so often, a comical toxic-green suit (which apparently evokes little or no association with nature or the environment, nor do those green ‘environment-friendly’ bikes or soda green cans –see pictures), walking on cars while singing cheesy ballads. He even threatened to buy (backed by an anonymous consortium of benefactors) America’s flagship paper,The New York Times,in order to turn it into a Chinese syndicate -just for the fun of it!

His boldness and the moral creativity combined with the vanity of a peacock (and too many graphic novels? Robin Hood? The Green Lantern?) never failed to attract Anglophone media attention, with journalists as well as social critics asking themselves: Is this for real or just brilliant stand-up comedy? He certainly comes across as fairly obnoxious with this group photo fetish -Him, He and his Money!

Oh and, yeah, he once smashed a Mercedes Benz with a gigantic remote-controlled jackhammer (see picture below). He refers to himself as a ‘demolition expert’ and… HOLY COW…have you seen his BUSINESS CARD?!!! 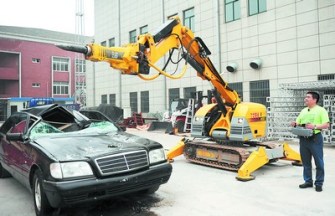 “I may be a maverick, but it doesn’t mean I like playing tricks. I want to purchase the New York Times.”

In a recent bid for diplomatic controversy, the Washington Post continues its report, Chen promised to feed at least 1,000 homeless Americans and provide them with 300 dollars in cash. (He later seemed to have retracted from the part with the cash hand-outs, it appears.)

Some critics say that his stellar rags-to-riches story from a wretched, starving farm family to one of China’s richest entrepreneurs is partly to blame for his exegesis of things –watching his risky, hyper-active behavior and over-the top celebrity cult surrounding an otherwise deeply mysterious and complex personality haunted by a tremendous urge to give back, combined with a great pull of comic stardom, and driven by an even bigger humanitarian heart.

To keep up to date with Dragons and Pandas you can also follow me on Twitter: @worldethics; my website: East-West-Dichotomy.com; or my other blog: You’ve Heard About It.

Collective illusions — false assumptions about society that many people share — have existed for thousands of years in many different ways. Today, because of social media and modern technology, […]
▸
32 min
—
with
Todd Rose
Up Next
Culture & Religion

Timothy J. Burger has penned a fascinating article for Politico highlighting several gay men who worked in George W. Bush’s administration, most of them in the closet the entire time. The piece provides a glimpse into their lives and their allegiance to a president they couldn’t help but support.