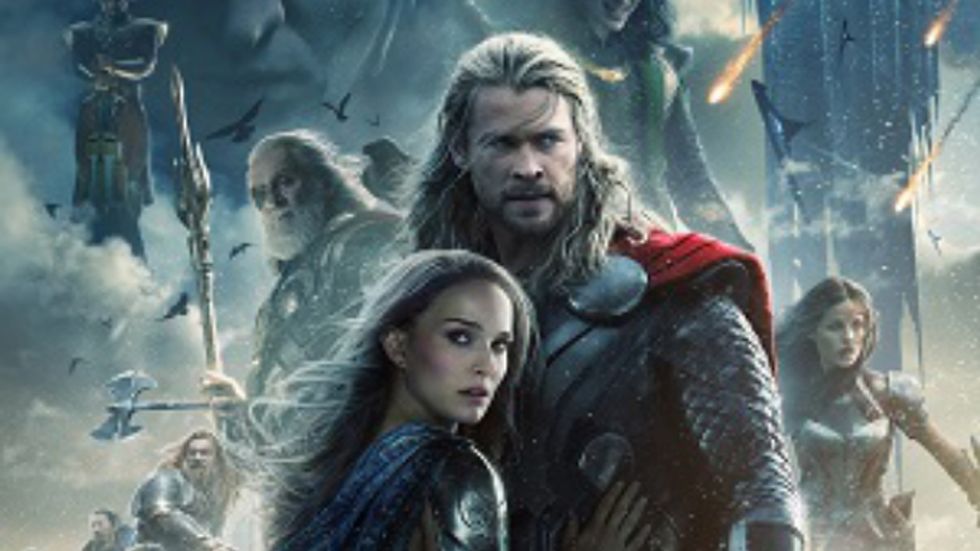 Spoiler warning: To understand this review, you do need to have seen the film. To say this is a spoiler warning implies there is a story to be spoilt. There isn’t.

Film and I have an understanding: I relish in childish wonder at the flashy lights, gorgeous people, and Hans Zimmer soundtracks and it doesn’t receive any form of critical response. I don’t stare wide-eyed at plot holes but at black holes created through dodgy science; it gives me Megan Fox and I don’t care that characters have all the depth of saucers.

But, sometimes – sometimes – film pushes harder in its stupidity than usual. Thor: The Dark World is the latest offender and I wish it was a small creature so I could torture it as it did me.

When, oh when, will Marvel give us a villain who is not doing bad things just, you know, for badness’ sake? The well-worn banality of villainy Hollywood keeps regurgitating… because plot… is here in full, boring force with an evil man-person-thing doing evil things for evil reasons.

Quite literally, he wishes to cover the universe in darkness / destroy it. Could you be any more yawn-inducing in your threat to existence than wishing just to “Control A – delete - empty recycle bin” it?

Gee, we’ve never seen that plot before! Thanks, “writers”.

When did we accept this as villainy? Why?

No explanation is actually provided for why he – this evil dude called Kevin or something - wishes to destroy everything; as if there could ever be a reason that makes us sympathise with his cause.

I’m not saying every villain needs to be sympathetic, but he needs to be understandable. The continual use of doing such evil so far above us becomes meaningless and causes little sense of dread; it reminds us that these beings (evil gods, terrorists, etc.) are nothing like us, they’re just there to be evil and must be stopped (America, f--- yeah!).

There’s nothing interesting to question, there’s no dynamic warranting further thought as to whether we might have done a wrong – whether the people we’re rooting for are the bad guys.

It doesn’t need to be this deep but it does need to be this interesting. We expect writers, professional creative writers, to engage us in ways that make us enjoy what-ifs, not tolerate so-whats.

Consider Loki. His performance in this film is the most entertaining and his reasons for acting – in the first and this film - are the fruit of a character we’ve come to understand; we can say he’s being a spoilt brat, a petulant whiny child, but at least we can all say we understand betrayal, irritation, being constantly thwarted. We don’t need to agree – hell, we don’t even have to sympathise – but we understand where his motivations stem from.

“Evil cos evil because evil via evil because plot” is the creative equivalent of considering an architect’s plan the same as a furnished home.

Second, the “ancient powerful artefact of ultimate destruction” is seen in full force when it’s… gentle nudging Thor in London. Yes, this great weapon possesses this supposedly terrifying bad guy (Kelvin?), who then faces Thor and, effectively, tickles him. This is the same weapon that could cover the universe in darkness, etc. etc, and it’s now revealed to be Norse massage equipment, with a literal happy ending.

Third, this ancient artefact possesses Pretty White Girl Who Totally Has More Depth Than Caring About Her Man #1 played by Natalie Portman. We see her eyes change, she has a connection with it that sees the weapon protect her from dangerous elements like rain and friendly policemen. I kid you not.

All of it hints - only hints - at this artefact’s great destructive power but it does nothing except play with Thor’s muscles and prevent her make-up from running.

Here were the perfect elements for a villain Marvel/Hollywood seem to loathe: a woman, who is renowned for being smart (she’s a scientist that does a science thing and has three degrees, but she can’t change her ringtone on her phone… moving on), who is made evil through no will of her own, bent on destroying since she’s giving into a powerful virus. Here, Thor, with the weight of worlds and his duty to protect trillions of people, would have to face ending the love of the mortal woman he loves. Here, it means making the sacrifice Odin keeps telling him he’d have to make: his millennia-long life-span against her petty mortal one. His love for her – we’re told they’re in love but there’s as much chemistry as there is literal science – would be measured against his duty.

Of course, Marvel did do this in X-Men 3, with the Dark Phoenix and Wolverine (the most useless X-Men/X-Man perhaps). However, the element missing is Thor’s great duty to protect due to his immortality… actually, that would make him not that much different to Wolverine who also doesn’t really age and tries to protect others.

However, the writers could’ve created a conflict between Evil Natalie Portman and Loki, who maybe wants the power, etc. etc.

Point being, this is more interesting than anything that occurred in the film, the elements were all there, and the weapon itself is never shown beyond massage equipment and umbrella.

I don’t hate often but I truly, deeply, hate Kat Denning’s Darcy more than anyone I’ve seen (this year). She has the now boring snappy and snarky funny person trope that Whedon created and has been milking in his various guises and enterprises (see Marvel Agents of S.H.I.E.L.D.) for eons. Eons, I say. She plays Pretty White Girl Who Totally Has More Depth Than Caring About Man #2 or, her shorter name, Exposition Lady.

When a character’s absence would do nothing to the plot or story, you clearly have a problem. Prime example: Darcy commands her “intern” to hammer in some poles around London and they only have a set amount of time before the science can fight back against the evil. The intern does so. Instead of splitting up to hammer in poles herself, Darcy has the important job of holding a walkie-talkie to shout “done” or give a thumb’s up to Dr Forgettable Pretty Lady #1 who is… also holding a thing to push.

Marvel women, ladies and gentlemen: Incapable of hammering in science poles to save time because the world’s ending but doubly capable of pushing buttons dramatically.

Darcy was annoying in her attempts at humour. Humour is welcome – as Whedon showed in Avengers – but when that’s all she does all the goddamn time and it’s never funny then it’s just pretty woman noise. See that Marvel? You “made me” reduce a woman to being nothing but noise. Because that’s how you wrote her.

As indicated, Natalie Portman’s entire character is anchored by seeing Thor. Her science is about nothing but finding him. I could not care less for romance even in real life, even from close friends; and here, the film did nothing to establish why we should care about them. There were no stakes. We didn’t care about their stupid happiness. Instead of showing how the quest creates danger by, say, having the evil artefact poison her toward evil and maybe death, it’s just kind of… there. And then bashed away with a hammer.

Do I need to mention the stupidity of covering your lover’s body with your own “against” a falling object the size of a building? Do I? No. I don’t. Because that’s stupid and you’re a goddamn scientist with three degrees (who can’t operate the settings function on her phone). Did Aaron Sorkin write these women?

Sir Anthony Hopkin’s acting is well-established as being amazing, brilliant. His voice is enough to chill the blood. Yet, his Odin could not be more bland than the relationships that supposedly exist in this film. He holds no command. He offers little irrationality or fiery resolve in wanting revenge for his wife’s death – of course someone dies in this film, boo-hoo, and it’s the only decent woman character.

It’s unfortunate, but Hopkins would be a better villain than father figure. He’s never been able to do that right. Do I need to remind you about Wolfman?

I love you, Dr Lecter, but I’ll be damned if I want your fatherly respect. Again, there was little chemistry or sense of relationship between Thor and Dr Odin, here.

This film is awful. The acting is without depth or care, the plot as flat as characters. Visually-stunning, flashy, with some brilliant action scenes. But this deserves to be seen so that it can get the hate it deserves.