What Is Norman Rockwell’s Thanksgiving Picture Really About?

We all know Rockwell’s Freedom from Want by heart, even if we don’t know its title. 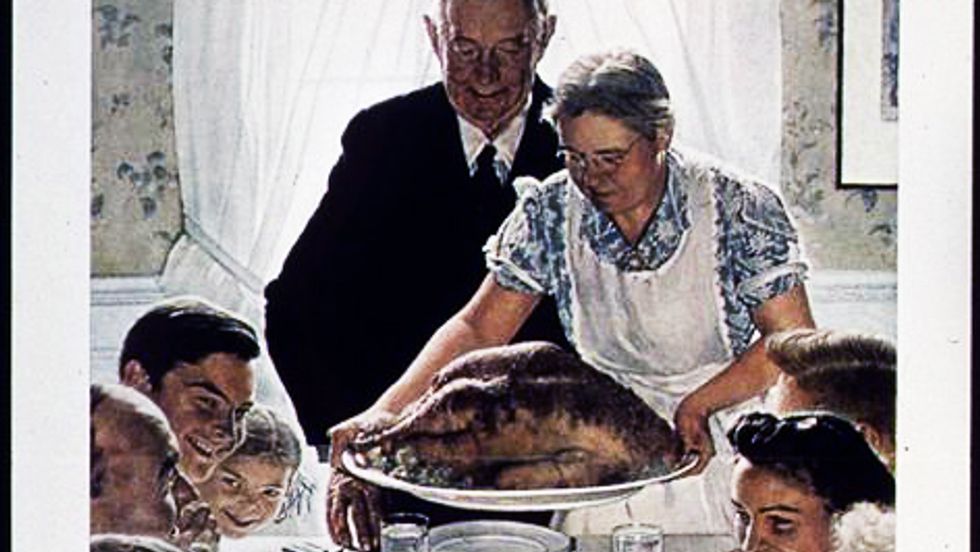 We all love visual shorthand for our lives, whether it’s the Apple logo for technology or a flag for patriotism. Just as Thomas Nast’s version of Santa Claus endures as the quintessential Christmas image, Norman Rockwell’s classic painting of an American family at Thanksgiving (detail shown above, full picture here) has stood for seven decades as the single image most Americans associate with turkey day. But few Americans know the full story behind (or even the title of) Rockwell’s painting—the political and human rights roots of the text Rockwell aimed at illustrating. As we plan to sit down as a nation and give thanks, it’s important to remember what Norman Rockwell’s Thanksgiving picture’s really about.

As any school child knows as they industriously make construction paper turkeys and buckled hats this week, Thanksgiving started with the pilgrims way back in the 1621. However, the idea of celebrating Thanksgiving as an official American holiday only dates back to 1863, making this year the sesquicentennial of Thanksgiving as well as the American Civil War. Then-President Abraham Lincoln deemed the last Thursday in November as a day of “Thanksgiving and Praise to our beneficent Father who dwelleth in the Heavens” during those dark days of fraternal conflict. Almost four score years later, President Franklin D. Roosevelt signed a bill on December 26, 1941 (just weeks after the attack on Pearl Harbor plunged the United States into World War II) moving the date for Thanksgiving from the last Thursday to the fourth Thursday in November. Sadly, Thanksgiving’s too often been celebrated from its very beginnings in the shadow of war and with the specter of empty seats around the table.

In January 1941, FDR delivered his State of the Union address in which he outlined his idea of the Four Freedoms, which included freedom of speech, of worship, from fear, and from want. Defending his vision against charges of unrealistic idealism, FDR added, “That is no vision of a distant millennium. It is a definite basis for a kind of world attainable in our own time and generation. That kind of world is the very antithesis of the so-called ‘new order’ of tyranny which the dictators seek to create with the crash of a bomb.” Against fascism on the rise in Europe, FDR struck a blow for freedom by eloquently and efficiently listing its essential components for all the world to see.

Two years later, over four consecutive issues during February and March 1943, The Saturday Evening Post published essays on each of FDR’s Four Freedoms, each accompanied by a painting by Norman Rockwell. To depict Freedom from Fear, Rockwell painted a mother and father tucking their children into bed to sleep the sleep of the blissfully innocent. For Freedom of Worship, Rockwell collected together a wide array of faces each with hands clasped in prayer—a fascinating image of spiritual solidarity at a time when Jews were being annihilated across Europe for their faith. In Freedom of Speech, Rockwell painted a single brave soul standing up at a meeting to speak his mind and bare his soul. When it came time to symbolize Freedom from Want, Rockwell chose Thanksgiving as the perfect symbolic moment for Americans.

We all know Rockwell’s Freedom from Want by heart, even if we don’t know its title. Three generations circle the food—a nuclear family more rarely seen today, but still existing in some hearts and minds as an ideal. (If Rockwell were painting now in 2013, what might that modern American family look like racially or even in terms of sexual orientation?) From the lower right corner, in the finest Renaissance tradition of painting, a young man looks out at you directly—the classic challenge to the viewer posed by the painter and his painting. His smile asks you to join in with the wonder at the bounty set before them, but is that all it asks? After more than a decade of overseas wars draining of us blood and treasure and an economic downturn further depleting our reserves of good will and thankfulness, that young man’s smile reminds us that the Thanksgiving thanks are not necessarily for abundant protein and four kinds of vegetables. Instead, the thankfulness is for having each other and the enduring capacity of people to free one another from all kinds of want—physical, emotional, and even spiritual.

Fox News’ John Stossel recently posed as a panhandler in a piece aimed at blanketing the homeless begging on the streets of America with the label of “scammers.” Despite all scientific evidence to the contrary, Stossel argued that those giving to the homeless unwittingly enable those people to abuse substances and generally live lives of work-free luxury. For Stossel, the Thanksgiving of Rockwell’s painting is for those who deserve it, those who presumably have earned it. But the Thanksgiving of Rockwell’s painting actually speaks of the same freedom from want that FDR spoke of. We can’t “earn” or “deserve” such a freedom because, like the freedoms outlined in our Declaration of Independence, they are “inalienable rights” handed down by God, but “enabled” by humans. We can’t earn them or fail to earn them, just as nobody has the right to deny them to us. When I look at Rockwell’s Freedom from Want I see the true message of Thanksgiving—the message forged in times of war and want—not Stossel’s message of “I’ve got mine.” Yes, please give thanks for all you have this Thanksgiving. But please also remember that part of giving thanks involves helping others to have something to be thankful for, too. Give everyone a place at the table and you’ll be able to smile back at that boy in the corner in the true spirit of the season and the true meaning of Norman Rockwell’s painting.