How the Great Artists Imagined Paradise Lost, and Regained 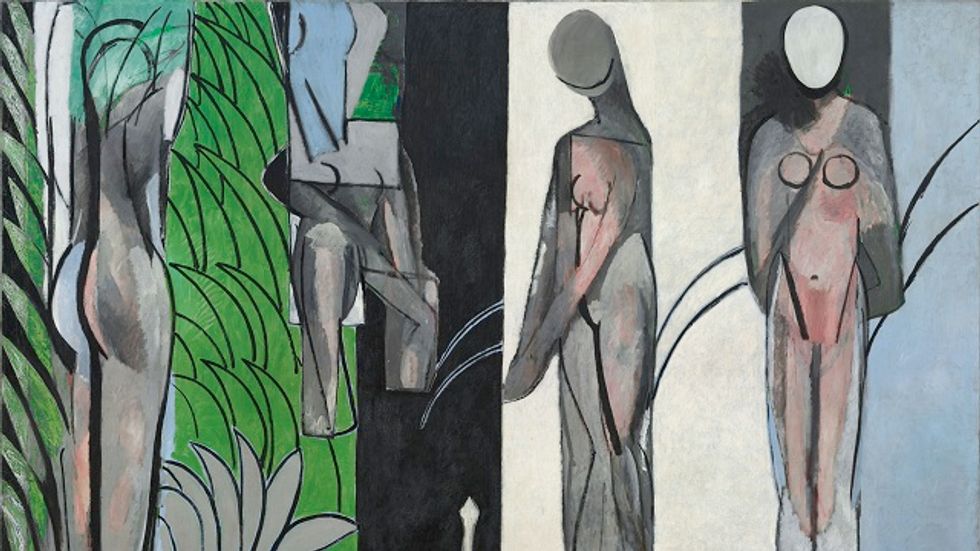 “We are stardust. We are golden. We are billion year old carbon. And we’ve got to get ourselves back to the garden,” sang Joni Mitchell in her song “Woodstock.” Every generation before and since has longed to return to the garden—the Edenic paradise found in every human culture and religion on earth. In Gauguin, Cézanne, Matisse: Visions of Arcadia, we see how these three giants of modern art traced their own paths back. Along with a supporting cast of artists spanning centuries and crossing international borders, their journeys become a massively complex web of influences and dialogues that demonstrate just how deeply this vision of heaven on earth lies in the collective consciousness of humanity and continues to influence not only our taste in artists, but also our taste in presidents.

Joseph J. Rishel, curator of European Painting before 1900 at the Philadelphia Museum of Art, explains in the introduction to the exhibition’s catalog that the show first began as a thematic continuation of the PMA’s 2009 Cézanne and Beyond exhibition (which I wrote about here) with the idea of pairing the PMA’s own version of Paul Cézanne’s The Large Bathers with Henri Matisse’s Bathers by a River (shown above) because of Matisse’s admitted devotion to Cézanne and his bathers paintings, one of which Matisse himself owned. When Paul Gauguin’s epic Where Do We Come From? What Are We? Where Are We Going? joined the growing garden party, the idea of a new exploration of Virgil’s conception of Arcadia blossomed in French art from Poussin on and beyond. “Our own exploration considers how this interest [in Arcadia] was confirmed in Cézanne’s love of Virgil, inherited by Matisse through association, and transformed, and in many ways intensified, by Gauguin’s creation of his own repertory of Arcadian longings, both fulfilled and thwarted, that replaced the classical idyll with exotic primitivism, often with remarkably similar ends,” Rishel contends. Modern art through these modern artists permanently transformed the ancient idea of Arcadia, yet the same longing for the return of a lost golden age remained more or less intact.

The exhibition opens with a series of quotes from Virgil’s Eclogues giving background on the idea of a people “older than the moon” who lived with divine beings and invented the pastoral songs celebrating their magical land of Arcadia, which is also an actual place located on the Peloponnese peninsula. You then walk through a gallery containing illustrations by Aristide Maillol to a German edition of Virgil’s Eclogues and by Matisse to an anthology of Virgil-esque pastoral poems by Stéphane Mallarmé—all of which lay the foundation for the union of words and pictures to follow. (If you take the audio tour, press “777” to listen to Debussey’s Prélude à l'après-midi d'un faune, inspired by Mallarmé’s work, to add music to the multimedia mix.) The exhibition then builds with paintings by Corot and Puvis de Chavannes—popular predecessors to the big three in the show’s title—and follows them with works by Neo-Impressionists such as Seurat and Signac, near contemporaries whose approaches to Arcadia represent different paths that were taken aesthetically to the same goal. In these galleries the curators sprinkle several small paintings of bathers by Cézanne like breadcrumbs leading you to the main course.

When you walk into the big room with all the big paintings from the big names, it’s quite overwhelming. There aren’t many rooms where Picasso gets shouldered into a corner, but this is one of them. The three star paintings of the exhibition’s title dominate the room in size and intensity, but it’s Poussin’s La Grande Bacchanale (aka, The Andrians) from 1627 that quietly calls your attention, just as it drew the eyes of Cézanne, Matisse, Gauguin, and many others as they viewed it in the Louvre. If Virgil provided the verbal template for Arcadia, Poussin provided the visual one. (Rishel wonders in the catalog whether Cézanne’s Arcadian vision was “stocked more by words or by images,” in what had to be a close race.) Henri Rousseau’s The Dream also demands respect in a way that Picasso’s wan Adolescents doesn’t. To stand silently in the middle of these paintings and look from one to another, you get the full sense of how these artists and these specific works speak to one another.

The catalog helps fill in the silences in that conversation for those looking for a better seat at the discussion table. Rishel’s essay “Arcadia 1900” develops the central narrative of the exhibition and even gives Picasso some love by explaining why the rough and tumble Spaniard only infrequently painted paradise. Charles Dempsey’s “The Painter’s Arcadia” provides important insights into the “melancholic nostalgia” of Poussin’s Arcadian paintings that influenced everything that followed. Gauguin’s Where Do We Come From?, etc. takes on whole new dimensions thanks to George Shackelford’s “Trouble in Paradise,” in which Poussin Et in Arcadia Ego becomes an enigmatic forefather to the Tahitian puzzler. In “Re-visioning Arcadia: Henri Matisse’s Bathers by a River,” Stephanie D’Alessandro not only aptly outlines Matisse’s 8-year sojourn to achieve what she calls his “ode to Cézanne,” but also explains how the painting became Matisse’s personal battle during the years of World War I—an idiosyncratic idyll balancing ancient themes and modern methods. Finally, Tanja Pirsig-Marshall’s “‘Dream the Myth Onwards’: Visions of Arcadia in German Expressionist Art” shows how artists such as Franz Marc and Ernst Ludwig Kirchner adapted Arcadia for pre-World War I Germany, with an especially enlightening section on Kirchner’s nudes “embedded” rather than existing separately from the paradisal surroundings.

So many smaller works threaten to steal the show from the big three. Marc’s 1912 The Dream features one of the rare human figures in his animal-dominated art as a more harmonic and integrated reply to Rousseau’s work a gallery away. A landscape study sans people for Seurat’s La Grande Jatte (that Rishel jokingly called “Saturday in the Park”) strips down the beloved work to its natural foundation. A trio of bathers by André Derain finds a spot in the big room even if the artist himself remains confoundingly and fascinatingly a man without a neat category. Robert Delaunay’s City of Paris, which plucks the three graces out of time and plops them between the Seine and the Eiffel Tower, elegantly represents and earns new respect for “Salon” Cubism.

But, ultimately, why should we care about the Arcadian visions of the past, even when envisioned by the greatest painters? One big reason is the reality that today’s greatest “painters” of Arcadia are politicians. Candidates from every point of the political spectrum proffer better days ahead that usually involve a return to a golden age in the past. The faith we place through our vote originates in no small part from our belief in the ideological Arcadia peddled by the politician. Throughout the press preview tour, Rishel repeated returned to Simon Schama’s idea of the pastoral as being both “shaggy and smooth.” Gauguin, Cézanne, Matisse: Visions of Arcadia shows us the “shaggy and smooth” sides of Arcadia in a way that prepares us to see through the promises of better times in a more realistic way, lest we lose ourselves in a vision and lose much, much more in the exchange.

[Many thanks to the Philadelphia Museum of Art for the image above from, other press materials related to, and an invitation to the press preview for Gauguin, Cézanne, Matisse: Visions of Arcadia, which runs through September 3, 2012.]