Does the thought of death make you anxious? A new study suggests that the fear of mortality isn't really about the afterlife at all. 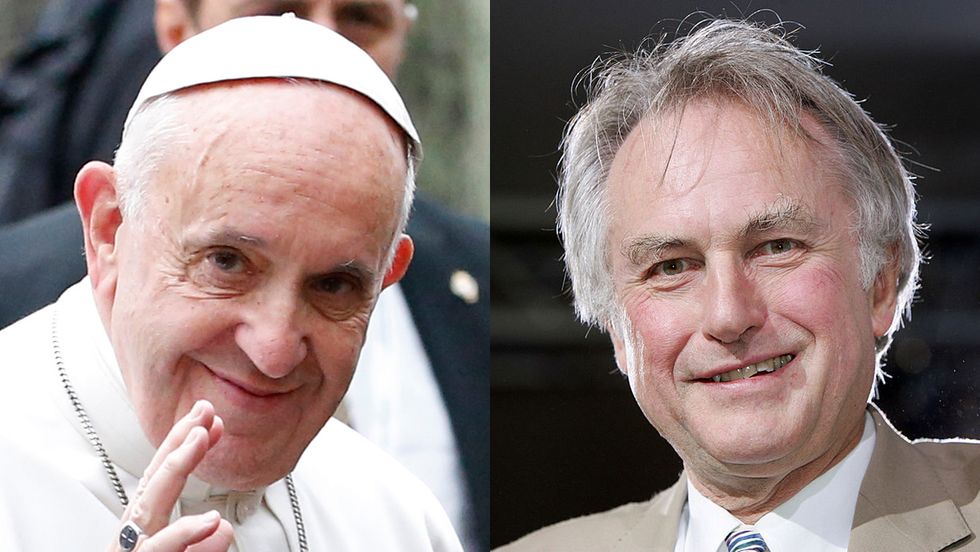 Pope Francis and Richard Dawkins, both positively cheery in the face of death.

Socrates warned against fearing death. He thought it irrational—the fear of death causes you to believe you’re wiser than you actually are. “No body knows death; no body can tell, but it may be the greatest benefit of mankind; and yet men are afraid of it, as if they knew certainly that it were the greatest of evils," he concluded. His real aim may have been the religious who expressed faith in an afterlife with utmost certainty, a trend still going strong today.

No mere mortal knows what occurs after death, yet that hasn’t stopped many from speculating. Though Socrates expressed unkind words toward the religious, turns out those who strongly believe in religion fear death less than the less religiously inclined—until you get to atheism, that is. A new study published in Religion, Brain & Behavior discovered a U-shaped curve toward contemplating death, with the most religious and atheists enjoying the least fear of mortality.

A team led by Coventry University research fellow Dr. Jonathan Jong scoured a hundred data articles over a half-century period representing over 26,000 people to uncover who feared death most, and least. At heart, this study is more about fear than death, as Jong makes clear in his proposed relationship between religion and fear:

Jong and team cite Ernest Becker, whose 1973 book, The Denial of Death, was awarded a Pulitzer the following year—ironically, two months after the author died from cancer. Becker postulates that civilization is actually a defense system against mortality, with our numerous rituals invented to offer an illusion of permanence. Perhaps what humans crave, he wonders, is a guarantee of eternity, a craving filled by dualism, the belief that a separate essence exists beyond flesh and fascia.

Becker understood that we desire a glimpse of eternity, some sort of contract that persists when blood stops flowing. Instead of confronting the illusion that drives societies forward, we create even more elaborate ruses:

Modern man is drinking and drugging himself out of awareness, or he spends his time shopping, which is the same thing. As awareness calls for types of heroic dedication that his culture no longer provides for him, society contrives to help him forget.

Enter botox. Enter resveratrol. Enter the afterlife. Jong points out that Becker calls religion “the ‘best’ illusion under which to live,” and that all preceding illusions are “functional facsimiles” to a belief in forever after.

Yet our forever afters are suspect considering how varied they are. In some circles it’s good form to poke fun at the idea of being promised dozens of virgins upon entering the afterworld, a notion scoffed at in a country where the predominant number of people think a beatific paradise built of gold will soon be theirs.

Joseph Campbell famously expressed that he didn’t believe people are looking for a meaning to life but rather an “experience of being alive.” We miss that point when focusing too far ahead. Jong and team found that complete cessation is the real issue: that once life ends there is, well, nothing at all. “I” stop existing—an approach actively encouraged in systems like certain forms of Buddhist meditation. While the fear of actual death—painfully, slowly—is apparent, the existential crisis encountered at the prospect of nothingness appears to cause the most anxiety.

An active acceptance to death appears to be healthy. In Elementary Forms of Religious Life, French sociologist Emile Durkheim writes that collective mourning helps alleviate the trauma of losing a loved one and bonds the community together. Such an acceptance of death might help explain why atheists fear it less than the religiously uncertain: when you do not fear transience, life is no longer so frightening — or serious. This is a longstanding link between Buddhism and atheism, which is why those two systems are not dissimilar in certain regards.

To be more discerning, Jong differentiates between extrinsic and intrinsic religiosity. Those displaying extrinsic religiosity partake in rituals more as a buffer between their lives and potential oblivion rather than as a matter of deep faith, which is expressed by the intrinsically religious. Unfortunately existential anxiety is not alleviated when only going through the motions. Much the same can be said for agnosticism.

Which, ironically, leaves the edges of religious thought as the least fearful. While Socrates might disagree with the approach, certainty appears to help the extremely faithful and those who don't think much about faith at all. While the distance between these two approaches is vast, there’s no denying the power of confidence.

Jong and team acknowledge shortcomings in their research. It was mostly focused on America, with contributions coming from the Middle East and East Asia. Nearly half the work researched showed no link between religiosity and death. As our relationship to death is usually more cultural than personal (though it might not feel that way) a broader study could shed more insight on the best approach to contemplating death. "More cross-cultural data are required before we can make general claims about the relationship between death anxiety and religion," says Jong.

Blaise Pascal famously wagered that it’s better to believe than not believe, just in case. This is an extrinsic argument. Perhaps a better wager would be to enjoy every moment as it happens, which is more aligned with Buddhism. Sure, there might be something to clean up after all is said and done, but since all we are truly certain of is the present, a less fearful approach to the short time we have here together might be in all of our best interests.