The Brazilian government has been trying to answer this very question in its ever-growing prison population, which has doubled since the year 2000. 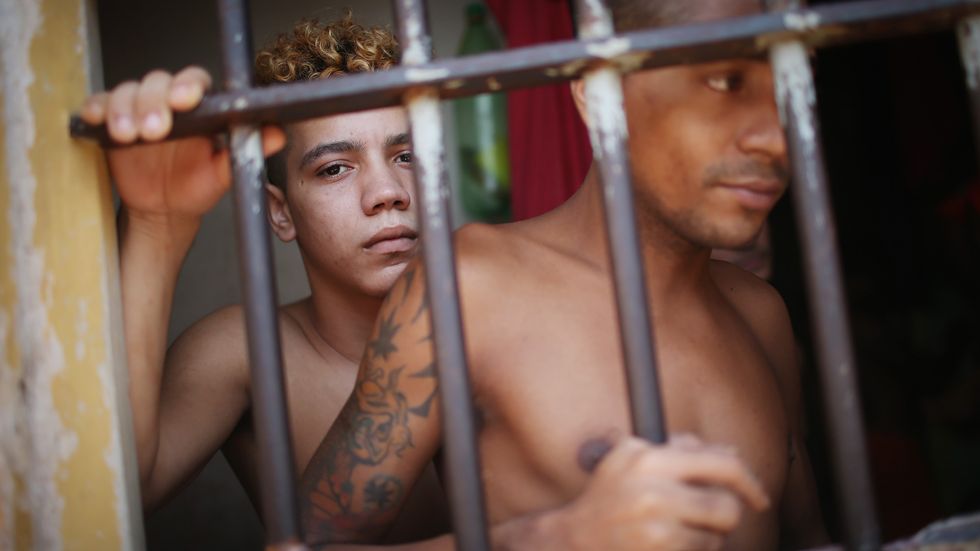 In 1953, long before shots of ayahuasca were paired with cacao elixirs at Burning Man Decompression parties, William Burroughs traveled around South America in search of the mystical beverage called yagé. Though Burroughs is remembered predominantly as a heroin junkie, he documented not only the hallucinogenic qualities of ayahuasca, but also the scientific possibilities of this intriguing blend of vines and leaves.

Ayahuasca was first “discovered” by Western science in 1851, when the Victorian naturalist Richard Spruce made his way around the Amazon (Burroughs later read his work). It would take the “father of ethnobotany,” Richard Evans Schultes, to bring ayahuasca to mainstream awareness. Ironically, perhaps, Burroughs and Schultes, both Harvard graduates, ran into one another in Colombia in 1953 while documenting yagé.

Burroughs never achieved the scientific results Schultes did. While the Beat writer focused on a book (eventually downgraded to an article) on the science, he was known for dramatic statements like, “NO ONE IN HIS SENSES WOULD EVER TRUST ‘THE UNIVERSE.’” A powerful observation in his letters to pal Allen Ginsberg, but not getting him published in Nature anytime soon.

Interestingly, when traveling through the Putumayo region of Colombia, Burroughs predicted a global ayahuasca boom. Today eco-luxe tourism is rampant in the Amazon, with rock star shamans grappling with sexual abuse accusations. In Los Angeles, yoga teachers who’ve drank the brew feel justified in labelling themselves “plant medicine shamans” after circumventing the rigorous dieta and apprenticeship process. With so much spiritual capitalism occurring around this drink, what benefits can actually be gleaned?

The Brazilian government has been trying to answer this very question in its ever-growing prison population, which has doubled since the turn of the century. In 2013, volunteer therapists working with Acuda, a prisoner’s rights group based in Port Velho, began integrating yoga, reiki, and ayahuasca ceremonies as part of a wide-scale rehabilitation effort to help the half-million-plus inmates scattered across the nation. While the brew is less studied than other entheogens, early reports are positive. One small study in Brazil saw a meaningful reduction in depression in volunteers. A larger follow-up saw a 64 percent success rate in treating depression. Another study focused on its potential application in treating addiction and other “diseases of civilization.” Some speculate that ayahuasca might have even wider-ranging applications:

The plant has shown potential to help people recover from trauma, PTSD, addiction and depression, as well as cancers and other afflictions.

The larger question of ayahuasca’s scientific and spiritual applications was entertained in the 2010 documentary, DMT: The Spirit Molecule, which has been viewed millions of times on Netflix, Youtube, and other streaming services (and which I served as music supervisor for). Parsing credible science from anecdote is always challenging, yet the transformative effects of ayahuasca are well documented.

Context matters. Last week I wrote about how mindfulness meditation might be dangerous for prisoners, but thus far ayahuasca seems beneficial for helping prisoners reflect on their crimes and, by extension, reducing recidivism rates.

This treatment is not universally welcome. One Brazilian resident, whose daughter was killed by one such prisoner, wonders how the murderer is allowed to enter the jungle to drink sacred medicine. The bigger question here involves the role prisons play in society: punishment or rehabilitation? This question is particularly pertinent in the United States, which holds more prisoners than any other nation. While no one is advocating that prison should be pleasurable, some view it as an opportunity to prepare inmates for reintegration into society. Many facilities accomplish the opposite:

Prisoners in supermax units experience extremely high levels of anxiety and other negative emotions. When released—often without any “decompression” period in lower-security facilities—they have few of the social or occupational skills necessary to succeed in the outside world.

Others believe prison serves one purpose: justice. One libertarian argument even states that punishing prisoners is more merciful than trying to rehabilitate them:

Justice requires punishment, punishment must be deserved, and just desert requires a punishment in proportion to the crime committed—neither too much, nor too little. This is far preferable to the senselessly draconian sentences and the perpetual monitoring and post-imprisonment sanctions subject to the whims of a grimly humanitarian state.

The latter argument is more nuanced than that singular quote, though that sentiment does conclude the writer’s overall idea, which boils down to this: Are we trying to help criminals or keep them as far away as possible? Do we turn the other cheek or demand an eye, a head, an entire body for an eye? The prison system is broken. Do we want to try to fix it, or let it continue on the corporatized retributive path it’s been leading for decades?

At least in terms of ayahasuca, I can respond thus: on the three occasions I’ve sat for ceremony I’ve left recharged, reflective, and grateful. Though the most intense psychoactive experiences I’ve had—more so than psilocybin, LSD, MDMA, mescaline, and peyote—I never felt anxious. The ceremony provides an opportunity to reflect over your life; if you don’t like what’s simmering below the surface, chances are the ritual might result in existential duress.

But coming to terms with what’s inside of you is more transformative than ignoring it, which is, from my studies, conversations, and experiences, the true power of ayahuasca. That this brew might help alter the course of a life gone astray is enough incentive to integrate it into the prison population. The medicine is social, spiritual, and therapeutic, but most importantly, it provides a human approach to aiding others. If the science continues leading in this direction, we should follow it.