During World War II, did Imperial Japan seriously consider invading Australia? Yes, warned official Australian propaganda at the time. It worked so well that most Australians today still believe their country faced an imminent threat back then. But military historians disagree: Japan did not want to overstretch its forces, and opted to isolate rather than invade Australia.

The debate is not merely academic. Invasion paranoia is a recurring theme in Australian history (1). It still informs the nativist fringe of the political spectrum and, it could even be argued, is the unmentionable wellspring of the country’s current hard stance on illegal immigration.

Australia’s Japan-centred paranoia peaked after the Fall of Singapore in February 1942. For Australia, that dramatic victory of the Japanese over the British signified the breaching of the so-called “Malay Barrier,” a notional line of defence separating Japan’s expanding Empire from Australia’s home front.

One telling example of the nationwide panic mode occurred in early 1943. Two Australian military observers on patrol in northern Queensland spotted a group of white shapes in the distance. “God! Japanese bloody sailors!” exclaimed one. The other recollected later: “Ahead of us we could see what looked like two dozen white uniforms and caps moving (…) It turned out to be three brolgas (Australian cranes), magnified by the heat haze.”

The anecdote is recalled in “He is (Not) Coming South – The Invasion that Wasn’t,” a paper in which noted Australian military historian Peter Stanley argues against the popular perception that Japan planned to invade Australia, and that, by extension, Australia’s wartime premier John Curtin was effective at deflecting the threat.

Stanley points out that, although “in the euphoria of victory early in 1942 some visionary middle-ranking naval staff officers in Tokyo proposed that (…) Australia should be invaded, in order to forestall it being used as a base for an Allied counter-offensive (which of course it became),” the idea was dismissed by the military hierarchy, “unable to spare the million tons of shipping the invasion would have consumed.”

Japan’s military hardware and manpower were needed more in China and against the Soviet threat. But few in Australia at the time were level-headed enough to draw that conclusion. The public mood was one of general panic before an impending doom. And, Stanley says, “the Curtin government abetted and fuelled (this) popular disquiet.” Exhibit A: a government-produced poster showing a Japanese soldier advancing towards a map of Australia. The header reads: He’s Coming South. The subheader: It’s Fight, Work or Perish. 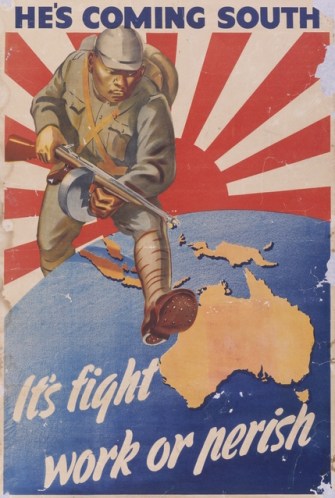 Some deemed the poster too alarmist; the state government of Queensland banned it for that reason. The Curtin government’s own Committee on National Morale warned that an overpowering sense of danger could “thrust idealism into the background and replace it with a crude physical self-preservation.”

Stanley indicates that Curtin himself believed in the imminence of the Japanese threat. If so, the map below will have done nothing to calm the Prime Minister’s nerves. It was part of a report prepared by Australia’s chiefs of staff in October 1942, entitled “Japanese Plan for Invasion of Australia.” The map showed how a diversionary attack on Darwin, in Australia’s Northern Territory, would clear the way for the main Japanese attack on Perth and Fremantle in Western Australia, after which the Imperial troops would advance eastward toward the country’s major population centres on the east coast. Japanese legends are helpfully transcribed in English. The map was forwarded to the Chiefs of Staff by the Australian legation in Chongqing, at the time the provisional capital of Chiang Kai-shek’s Chinese nationalist forces. The legation got the map from Admiral H.C. Yang, Nationalist China’s director of military intelligence.

In March 1943, PM Curtin showed the map to Australian journalists as confirmation of Japan’s intention to invade. But, as Stanley argues, the Chinese themselves thought the map was a fake, as did all of Curtin’s military advisers. Which leaves the question: Who made it — and why?

Could it have been someone in Australian intelligence, eager to produce a “smoking gun”? Is it possible that Curtin, who repeatedly, unsuccessfully petitioned the British and Americans for more troops to protect Australia, knew more of its true origins?

Around that time, even Curtin had become convinced that the Japanese threat, if it ever had been real, had now receded. That didn’t stop the Australian government from launching yet another fear-inducing poster by mid-1943. Ringed with menace! showed a tourist post card image of Australia, with locals surfing and playing soccer — but surrounded by a black ring of Japanese submarines. To the north: Japanese-occupied Indonesia and the island of New Guinea, contested between Japanese and Allied forces. 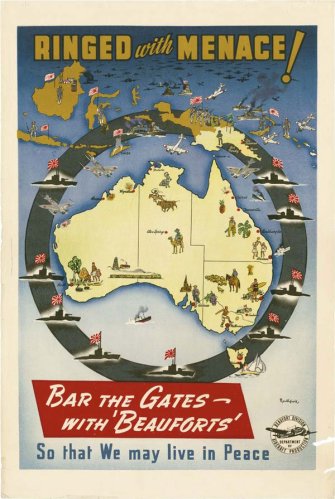 Stanley suggests that Curtin kept up the pretence of an imminent threat for electoral purposes — the prime minister’s Australian Labor Party went on to win a two-thirds majority in the August 1943 parliamentary elections. The World War may be receding in history, but exaggerating foreign threats for political gain: That sounds genuinely modern.

Fake invasion maps are a popular prop in wartime. In March 1942, Life Magazine published six different scenarios for a Nazi invasion of the U.S. (see #497). While those maps were presented as the work of Life Magazine itself, another invasion map, showing Germany’s designs on Latin America, was presented as genuine – but was also a fake (see #250).

Alzheimer’s disease is frightening, but the right combination of lifestyle choices can reduce your risk.
Up Next
Surprising Science

Star Trek’s ideal view of medicine is closer than we think.