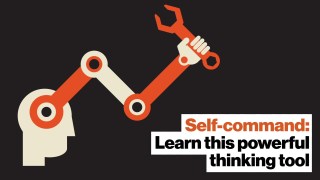 EMILY CHAMLEE-WRIGHT: Self-censorship is neither inherently bad, nor is it inherently good. And one of the things that I've been thinking about recently is what Adam Smith had to tell us about this. Adam Smith is an 18th century moral philosopher. Most people know him for The Wealth of Nations, but I think that his work from The Theory of Moral Sentiments is really helpful in this -- in helping us to figure out when it is appropriate, and when it is not appropriate to engage in self-censorship.

Think, for example, of -- you're in a live exchange with a conversation partner. You're in front of an audience, and your conversation partner starts acting like an arrogant jerk. What do you do? Our first impulse might be to mirror that behavior -- to jump in, and start being an arrogant jerk back. But, if we're wise to the ways of the world, we tend to say, maybe that's not the right thing to do, and what we're doing here is we're engaging what Smith called the impartial spectator. And we start to view our own conduct not through our own eyes, which tends to be partial -- we tend to be too forgiving of ourselves -- but through the eyes of somebody else. And the really wise scholar, or the really wise person in this conversation, is not going to just look at our conduct from the vantage point of our conversation partner, who's being such an arrogant jerk, we're going to be looking at our conduct from the standpoint of the audience. If it's in an academic setting, it would be that general academic audience. And we would imagine ourselves switching places with them, right? And then looking at our prospective conduct -- doing the gut check: Is what I'm about to say appropriate? Is it proper? Is it in alignment with what's expected of me as a student, or as a scholar? And that helps us. By switching, by imagining that we're switching places, that helps us to find the right thing to do, which is to say, I want to continue to be in alignment with what's expected within the general academic public. But also, it helps us to muster up the restraint to dampen down our emotions. And this is what Smith called self-command.

So that's one thing that we need to recognize is that, in that moment, we're engaging in a form of self-censorship there. We're censoring, we're dampening down what would have been our immediate response. That's a good thing. This is really important. I mean, Smith's entire theory of how we are able to live in a world where we are governed by moral principles depends on us being able to align our conduct with what's expected in society generally. So this is really, really important.

But let's imagine a different scenario, where you're, again, in an exchange with a fellow scholar, or a classmate, and there are onlookers. And this time, you're getting challenged in ways that are really confrontational, not just by your conversation partner, but by the whole audience, the whole classroom. Perhaps the Twittersphere is lighting up with condemnation of you, and your position, right? What do you do in that case? And that's a time where, again, Smith understood that the clamor -- he called it the clamor and vehemence of public opinion -- may be so strong that you start to -- even the seasoned scholar might say, 'You know, I want to take a pause here, because I'm worried that my impartial spectator may be off kilter a little bit. So I'm going to pause. I'm going to think really hard about what's being said there.' But, if after considering it carefully, if I really am aiming at truth-seeking, in this case -- if I'm really aiming at doing that which is praiseworthy, and not simply chasing praise itself -- if I'm going to then make my argument at that point, after I've had that thoughtful deliberation, then it's something that the impartial spectator will approve of. Even if there is a lot of clamor and vehemence from the crowd, I can trust that impartial judge who's looking at my behavior and saying, 'Nope, you were sincerely aiming at truth. You think that you're advancing the conversation in a way that is going to expand knowledge, and you're doing it in a way that's in keeping with civility, then you have pleased me,' says the impartial spectator.

But here's the thing: You don't just arrived onto the stage of academic discourse, or the arena of public discourse, fully formed in this way. It takes a lot of practice to get there. And Smith called this -- by engaging in the bustle of the business of the world, we acquire that self-command that we need to adhere to what is proper, to be sure to do whatever is possible to do that which is praiseworthy, and not simply chasing praise. And so that, to me, suggests that we need to be really thoughtful about developing in our students, with our colleagues, in ourselves, that sense of self-command that allows us to take a breath, really assess whether or not what we're about to say is in alignment with, or in opposition to, what would be expected of any civil scholar who's out there in the world, whether it's a student or whether it's a professor. But then, when we decide that, no, this is what we should be doing, because I am sincerely moving forward with an argument that I believe is going to expand truth.

From there, we need to summon that courage to do the right thing, which, in that case, would be to speak up. And that takes reps. It's like an athlete. An accomplished athlete drills so many times, they get that muscle memory where, when it's really difficult to do something in the moment of the big game day, it feels actually pretty easy to do because they've done it so many times before. So similarly, we need to become practiced in exercising this skill of switching places, and really assessing our conduct from the vantage point sometimes of the general public, but also sometimes from that impartial, well-informed judge that is going to give us an honest assessment of our conduct, despite what the clamor and vehemence of the crowd might say.