Nikola Tesla (1856-1943) was a pioneer scientist during the turn of the 20th century best known for his contributions to the design of the modern alternating current (AC) electricity supply system. Tesla was a physicist, mechanical & electric engineer, inventor and futurist, as well as the possessor of a near-eidetic memory. He spoke eight languages and held 300 patents by the end of his life. His legacy has experienced a major resurgence in recent years — the name Tesla, as you might have heard, is way in vogue right now — as many of his predictions have inspired the search for wireless, unlimited supplies of power.

Tesla was as known for his tenacity and passion for science as he was for his expertise. Here’s a quotation that embodies that: 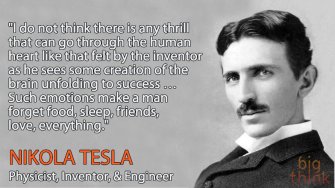 “I do not think there is any thrill that can go through the human heart like that felt by the inventor as he sees some creation of the brain unfolding to success. … Such emotions make a man forget food, sleep, friends, love, everything.”

The world is full of Tesla fans and devotees, although the most notable is almost certainly Elon Musk. Check out the video below featuring the Tesla CEO:

Purely physical and chemical processes can deceive us into thinking that life is present, when it actually is not.
Up Next
Starts With A Bang

Ask Ethan #92: Is there a limit to temperature?

Image credit: Shutterstock. If you took all the energy out of something, you’d reach absolute zero, the coldest temperature of all. But is there a highest temperature? “Nothing is lost… […]