Today — May 5, 2015 — Google’s very lovely doodle features the globetrotting journalist Nellie Bly who, at the backing of her New York World editor, raced around the world in 72 days in 1889-90. 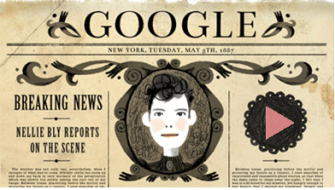 Bly may not be the most famous person in history, but her tale is certainly getting a nice boost from Google today, and that’s a very nice thing. Unfortunately, amidst this very nice thing, very little is being said about Nellie Bly’s reluctant rival, Cosmopolitan writer Elizabeth Bisland, who — with only a few hours’ notice — was dispatched on an analogous journey of her own. Her goal? Beat Nellie Bly, though Bisland refused to refer to her adventure as a race.

Bly was the more popular of the two and eventually the victor, which is part of the reason why you’re more likely to know her than Bisland. But Bisland was a fascinating figure in her own right, a self-made feminist and an incredibly gifted literary writer. Her “race” with Bly has been the subject of several prominent works of popular history.

So it only seems fitting that, on Nellie Bly’s big day on the internet, Elizabeth Bisland gets to at least have a word in. As such, she is the subject of today’s Words of Wisdom, the following quote derived from her book The Abdication of Man. Bisland describes the process by which leaders fall — not through external forces, but by way of internal errors. A bold take from a bold woman.

“No ruler is ever really dethroned by his subjects. No hand but his own ever takes the crown from his head. … When he ceases to lead … the revolt which casts him from power is only the outward manifestation of his previous abdication.”

from The Abdication of Man, page 195.

Gravitation, all on its own, can reveal what's present in the cosmos like nothing else.
Up Next
Culture & Religion

For Believers, Talking to Atheists Is Like Confronting Death

Psychologists think there's another reason behind the scorn atheists face, and it's fear. Atheists make some people confront the idea there may not be everlasting life after death.