Women are still greatly underrepresented in elected office—even though new research shows they may be more effective politicians than their male counterparts. 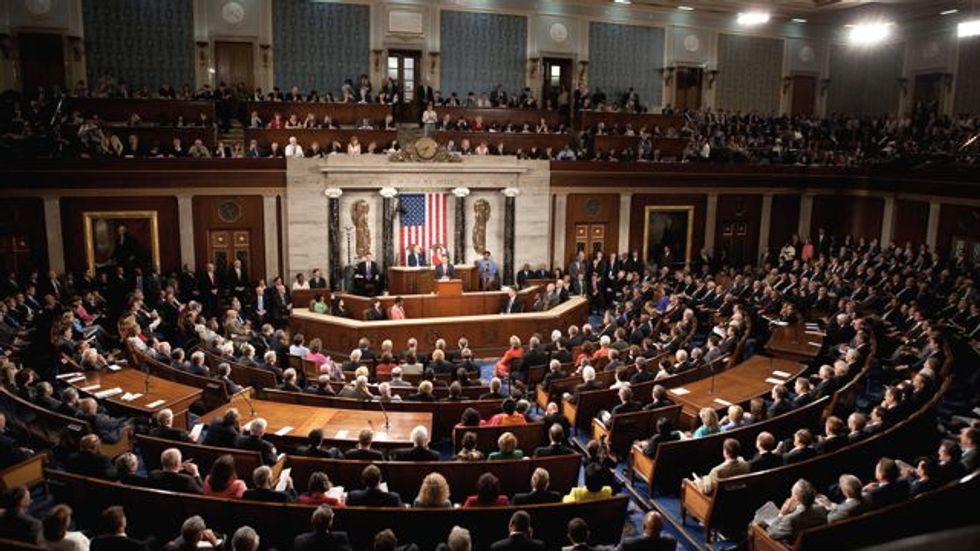 Ninety years after the 19th Amendment guaranteed their participation in American politics, women are still greatly underrepresented in elected office—even though new research shows they may be more effective politicians than their male counterparts. According to the Center for American Women and Politics at Rutgers University, women currently hold:

But an ongoing study by Sarah Anzia at Stanford University and Christopher Berry at the University of Chicago has found that districts served by women legislators are at a distinct advantage over those represented by men: U.S. congresswomen bring home roughly 9 percent more discretionary spending than congressmen. As a result, districts that elect women to the House of Representatives receive, on average, about $49 million more each year. The report finds that bringing home more federal dollars and benefits doesn't hurt women legislators' performance in policy-making—congresswomen sponsor more bills and obtain more co-sponsorships for their legislation than their male colleagues do.

This difference in performance between female and male legislators may be a result, in part, of the plain fact that it is more difficult for women to get elected. Titled the "The Jackie (and Jill) Robinson Effect," the report finds higher performance amid persistent bias has a systematic effect on who reaches the highest level—and on what they do while they're there. Jackie Robinson was one of the greatest baseball players of his day not because he was African-American, but rather because the discriminatory bias against African-Americans in baseball meant higher-level talent was needed to break those bias barriers.

"If voters are biased against female candidates, only the most talented, hardest working female candidates will succeed in the electoral process," Anzia and Berry write. On top of that, "if women perceive there to be sex discrimination in the electoral process, or if they underestimate their qualifications for office relative to men, then only the most qualified, politically ambitious females will emerge as candidates." It doesn't matter whether the sex-based selection is from actual or perceived, active or passive, origins, the report finds that "women who are elected to office will perform better, on average, than their male counterpart."

Mary Robinson, former president of Ireland, attributes this difference to the fact that women are more collaborative. She tells Big Think that "women are actually more inclined towards that more modern leadership, which is collaborative problem-solving, enabling, consultative, not just trying to assert a kind of hierarchical power." Men may also employ this sort of leadership, but it is distinctly feminine, she says.

Robinson is living proof that this feminine style of leadership can be both effective and popular. Halfway through her term as president, she had an unprecedented approval rating of 93%. She achieved this not by playing down her femininity but by embracing it. "When I was elected President of Ireland, I was determined to show that I brought to it the fact that I was a woman and was going to do it with various skills and I felt that they were enabling, problem solving, being more inclined not so much to want to lead in a kind of a natural way, but rather to lead by discussion and empowerment of others—to lead by example, lead by nurturing." But there is still a double standard for women politicians, she says. "If men are bold and assertive, that’s admired. If women are, it’s called shrill."

And if there is one rule in politics, it is that action is less important than perception. But here things get complicated for female politicians in general. In terms of individual leadership traits, women are perceived to possess more of these traits than men, but that doesn't translate to being perceived as better overall leaders. In a 2008 Pew Research Center survey of eight important leadership traits, women outperformed men on five and tie on two. Americans ranked women higher in honesty, intelligence, compassion, creativity, and outgoingness—by as much as 75 percent. And in the qualities of hard work and ambition, men and women tied, according to the survey. The only quality in which men scored higher than women is decisiveness, in which men and women were separated by a mere 11 percentage points. Yet when asked the single question if men or women make better leaders, the results seemed to contradict these other findings: a mere 6 percent of the 2,250 adults surveyed say women make better political leaders than men, with 21 percent favoring men and 69 percent saying the sexes are equal in this area, which explains the report's subtitle, "A Paradox in Public Attitudes."

So what accounts for this perceptual paradox? Politics professor Michele Swers of Georgetown University tells Big Think that it's not simply a matter of if women are more effective legislators; party politics plays an essential role in who gets elected. “If you look at how people react to candidates, there are certain stereotypes that people have in their mind about what’s a women’s issue and what’s not a women’s issue, so you may be more likely to prefer a female candidate if what’s on your mind are issues like health care and education, for example,” she says.  "However, when I’m in the voting booth, I’m voting for the Republican or I’m voting for the Democrat, so those gender stereotypes interact with that type of thing as well,” she adds.

A female Republican candidate, for example, might sway a voter by being Republican or by being female, and for following the policies perceived to be favored by either, Swers explains. Essentially, more women are elected to the highest ranks in politics when more are candidates from prominent political parties. The difficulty lies in producing a political system, both in the U.S. and around the world, that accomplishes this.

— Anzia and Berry, "The Jackie (and Jill) Robinson Effect: Why Do Congresswomen Outperform Congressmen?"

— Center for American Women and Politics at Rutgers, the State University of New Jersey