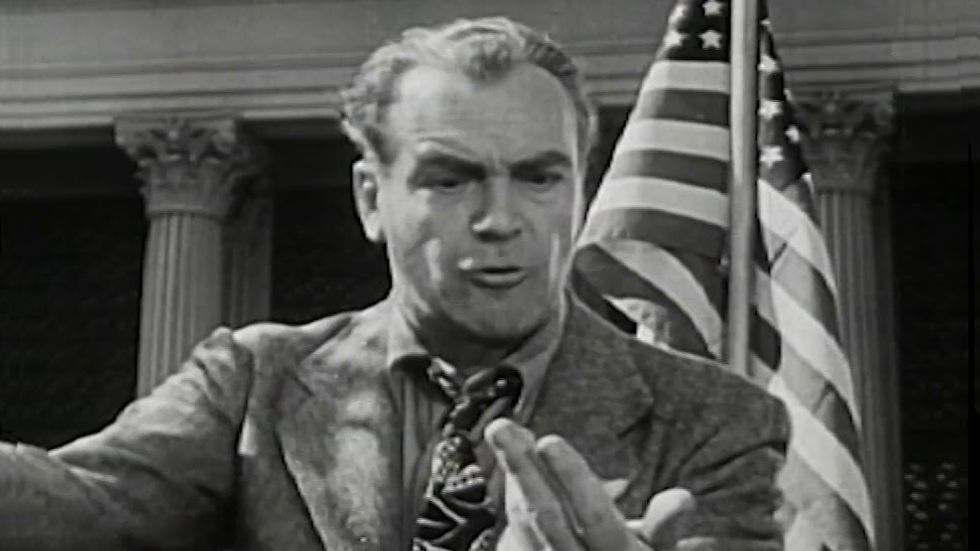 A still from the War Department's "Don't Be a Sucker" educational video.

Imagine a world where Nazis were just in the streets. Where violence shocked society to its core. A place where the specter of racial bigotry and demagoguery was ever present. Where the US military is fighting with an army that discriminates not on merit, but on social policy.

Against this background, the War Department re-released an educational film entitled Don’t Be A Sucker, first produced in 1943. It tells of the dangers of racism and fascism, and for reasons that must be all too obvious, the short film has struck a chord with viewers today.

The film begins with the most 1940s-sounding narrator possible explaining that some people are suckers. They buy into what is clearly a racket because it looks like a good deal. He takes us from these suckers to a typical American man listening to a racist speaker, attacking every minority in the book. The listener is fine with it, until his minority group is mentioned as a menace. Then, and only then, does he reject it.

Seeing this, a Hungarian professor and immigrant to the United States tells him of how the Nazi Party came to power in Germany. Turning the population against minority groups and any other group that could oppose them, burning facts that were inconvenient and declaring the truth according to the Party to be the only real news. This series of events lead to the deaths of millions of suckers who bought the Nazi Party’s promises, and tens of millions of their scapegoats.

The film gives a happy ending, but warns us that it can happen here. It needn’t though, says the Hungarian professor, we are all minorities in some way if we live in America, and we all need to stand up for our minority rights. Otherwise, we’ll be the suckers.

Why is it so popular now?

The film has been shared on social media hundreds of thousands of times in the last few days.

With the recent march to Unite the Right and the resultant deaths, spiking numbers of anti-Semitic and anti-Islamic acts of vandalism, and an increasing selection of fake news sources, the world of today shows more than a passing resemblance to the world of the 1930s. The number of hate groups in the United States is increasing rapidly, and the far right is better organized than ever.

Uhh, about that happy ending….

While the video shows us the horrible effects of race baiting and fascism, it does also show us why people buy into them, and suggests a solution. The Germans who agreed to the Nazi’s platform don’t start by hating the Jews, they started by wanting a better life and were suckered into thinking that religious and ethnic minorities stood in their way.

The film suggests that we can all take some action to prevent the horrible events of the 1930s in Germany at the individual level. “It started here,” the professor says, referring to a park with a Nazi speaker. He encourages us to end it there. He reminds us that people are taught hatred, that they were unable to see through the lies of the fascists, and how easy it is to be drawn into a soothsaying conman.

But, with even a little dedication, we can prevent the horrors of history.