Is it acceptable to write a story from the perspective of someone who is completely unlike you?

Yann Martel is the author of The High Mountains of Portugal and Life of Pi, the #1 international bestseller and winner of the 2002 Man Booker (among many other prizes). He is also the award-winning author ofThe Facts Behind the Helsinki Roccamatios (winner of the Journey Prize), Self, Beatrice & Virgil, and 101 Letters to a Prime Minister. Born in Spain in 1963, Martel studied philosophy at Trent University, worked at odd jobs—tree planter, dishwasher, security guard—and traveled widely before turning to writing. He lives in Saskatoon, Canada, with the writer Alice Kuipers and their four children.

YANN MARTEL: I think transgression is central to art. In art you cross borders and I've done that constantly in my fiction. So, for example, my first book was a collection of short stories and in it were the main stories about two students, one of whom, as a result of a blood transfusion, gets AIDS and he slowly spirals towards death. And the two encounter each other -- his friend visits him every week in the hospital and they start telling themselves a story set in Finland about this Italian family in Finland. And to give it a backbone they say that each episode in the story of that family must resemble one historical episode of the twentieth century. So in the first episode of this family, the Helsinkis of Roccamatios, it has to imitate 1901. And in 1901 Queen Victoria died. So in the family, in the Helsinki family, Roccamatios, the patriarch, dies. So it creates this parallel. And so right away you have a setting here -- here I am, a Canadian writer, and I'm writing about a fictitious Italian family in Finland and they're using historical parallels that come from all over the world. Right away I'm exploring realities that are different from mine. It's even more obvious with my next book which is my first novel called Self.

In Self you have a boy who's traveling, he's backpacking, he's 17. He's starting very young. And on his 18th birthday he wakes up and he's a girl, he's a young woman. And he's a young woman for seven years. And then he becomes a man again. And his gender orientation starts to vary too. Initially, when he's a young woman, he's thinking as a heterosexual male so he's attracted to women. So sorry, she's attracted to women. And then slowly her orientation starts to shift and she's attracted rather uncomfortably to young men. And the first time she kisses a young man the first thought that pops into her head is 'I'm gay'. Because in her mind, in her thinking, she's still a male and she's kissing a male therefore she's gay. But in fact she has the body of a woman. So conventionally she's heterosexual. And then when she switches back to a man again, once again the slide takes place. And so there I was very obviously exploring a front, a border that I haven't crossed myself. With my mind I went somewhere else. I was interested in exploring what it means to be a man, what it means to be a woman; where does sexual orientation come from?

I was exploring the idea that the body is an environment to which we adapt. Just as people adapt to hot climates to cold climates, we adapt to our bodies. So there's a very obvious example of transgression. I went with my mind where I couldn't with my own body. And the point of that is that with the empathetic imagination we can go where nothing else can go, and therefore we can bring back truths that you can't actually bring back factually. And I've continued that with my other books. Life of Pi of course is a story of an Indian boy in a lifeboat with a tiger in the Pacific. None of those are true to me; I'm neither Indian. I've never been a castaway. I've never been in close proximity to a cat, to a big cat, to a tiger. The High Mountains of Portugal set in Portugal in the twentieth century featuring people that I am not. I think most art is a kind of transgression where we explore the other to find out what it means to be the other so that ultimately we find out what it means to be ourselves. Because we are who we are in relation to others. But the key thing is the empathetic imagination and the empathetic imagination is the great traveler. And travelers necessarily cross borders. And not only do they have to but it's a thrill to do so. It's a thrill encountering the other. 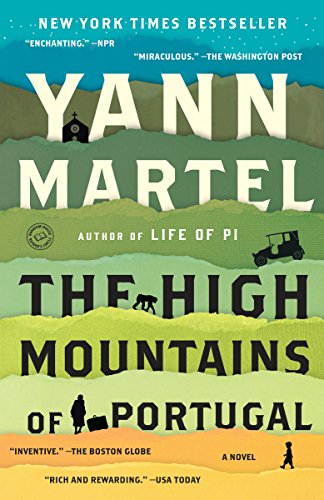 The High Mountains of Portugal: A Novel
List Price: $17.00
New From: $6.95 in Stock
Used From: $1.80 in Stock
From Your Site Articles
Related Articles Around the Web
art writing relationships discovery exploration mind empathy literature reading