Daniel Kahneman is an Israeli-American psychologist and Nobel laureate. He is notable for his work on the psychology of judgment and decision-making, behavioral economics and hedonic psychology. Kahneman’s family escaped[…]
Go to Profile 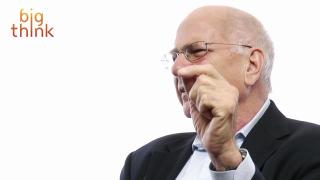 Ever wondered what you were thinking after making a bad decision? Daniel Kahneman explains.

Daniel Kahneman: People are not fully rational and they do—they make many choices that if they reflected upon them they would do differently.  There is no question about that. And we have a fair understanding actually of what is happening.  At least at the individual level my sense is that we have explored a lot of what is happening.  I wouldn’t say there is going to be no further progress, but we have explored a lot.

The major tendencies, well, the major tendencies . . . people tend to frame things very narrowly.  They take a narrow view of decision-making.  They look at the problem at hand and they deal with it as if it were the only problem.  Very frequently, it’s a better idea to look at problems as they will recur throughout your life and then you look at the policy that you’re to adopt for a class of problems -- difficult to do; would be a better thing.

People frame things narrowly in the sense, for example, that they will save and borrow at the same time instead of somehow treating their whole portfolio of assets as one thing.  If people were able to take a broader view they would, in general, make better decisions.  So that is certainly one of the weaknesses of human decision-making.  We call it narrow framing.

Mental accounting is a big deal.  This is the way that we live, so we have—we keep our money in different mental accounts for which we have different rules, so people will—well of course they spend their spending money, but then there is a hierarchy of the accounts that they will touch.  They will spend money that they have stored for vacation quite often before they will spend whatever they’re thinking of as savings for their children’s education.  So those are mental accounts for which people have different rules.  More foolishly—this is pretty sensible because mental accounting is a tool of self control—but more foolishly, investors tend to view each stock that they buy as a mental account and they want to sell it when it is a winner.  And so they tend to sell their winners and to hang onto their losers in their portfolio and that turns out to make them substantially poorer than if they had done things differently.

You need to be numerate for certain kinds of decisions.  So numerate people have a significant advantage over those who are not.  Understanding compound interest makes a huge difference whether you’re a credit card borrower or somebody with savings.  People have a very hazy idea of compound interest, and it is very detrimental.  So I would say that first of all you need to be numerate, but many people aren’t.

Then you need to frame things broadly.  It frequently goes with numeracy, but it’s not quite the same thing.  And then by taking the broad view, it is very important not to have overly strong emotional reactions to events.  And what I mean by that is that most of us tend to respond to gains and to losses, to changes that happen in our life.  Actually you’re better off if you frame things broadly and you think of  . . . you win a few, you lose a few... and you have very limited emotional response to small gains and to small losses.  That tends to induce better decision-making.