Being nice is not going to end racism

Robin DiAngelo
Dr. Robin DiAngelo is Affiliate Faculty at the University of Washington. She is a two-time winner of the Student's Choice Award for Educator of the Year from the University of Washington’s School of Social Work. Her scholarship is in White Racial Identity and Race Relations. In addition to her academic work, Robin has extensive experience as a workplace consultant in race relations and racial justice. Her book White Fragility: Why It's So Hard For White People To Talk About Racism was released in June and debuted on the New York Times Bestseller list.
24 October, 2018

ROBIN DIANGELO: After several decades of doing this work I feel like I know my people fairly well, and most people, most white people are not going to do anything different. Most white people that attend my workshops will say, "Wow, that was really interesting or provocative," if they're open. If they're not open they'll just have their reasons why they have to reject what I said. But even those who are open to the message, if it is not sustained it won't make much of an impact.

I often say when I'm in front of a group, "Everything outside of this room will compel you not to see this anymore." The forces are incredibly seductive. The forces of white solidarity, the forces of keeping other white people comfortable, the forces to not see or name any of this. And if you don't put some kind of structure around yourself to keep you focused there, you're going to slip right back into the status quo.

For so many white people, we think that the answer to racism is friendliness. If you notice the evidence that most white people will give for why they're not racist, one of their top pieces of evidence is, "I know people of color. I have friends of color." If we look at that evidence as a way to understand the deeper structure of meaning, right, it's actually quite revealing. So in order for a claim like that—"I know people of color, I have friends of color"—in order for a claim like that to be good evidence of my lack of racism, a racist can't be able to do that. Otherwise, it's not good evidence. "This is what distinguishes me from a racist. I have people of color in my life. I live in New York City. I was in Teach for America. I went to a diverse school." These are all the claims that white people will make for their lack of racism. Well, that must mean a racist cannot live in New York City, could not know or speak to or be friendly to people of color, could not be in the Peace Corps, et cetera. And I'm hoping you can see right now how ridiculous that evidence is. Because even in an avowed racist can do all of those things. So most white people believe that niceness is all it takes, and the status quo of our society is the reproduction of racial inequality. That's what it does. It's a default of all of our institutions, our norms and our policies. It's what our society does, it's what it's always done.

Our outcomes are not improving. By many measures, our outcomes of racial disparity are increasing. And all this system needs to keep on keeping on reproducing racial inequality—with whites benefiting from it—is for white people just to be really nice. Be really nice. Go ahead. Smile at your coworkers of color, go to lunch on occasion, and do nothing else. And you will uphold that system because niceness is not courageous. Niceness is not anti-racism. Niceness will not get racism on the table and it will not keep it on the table when everyone wants it off the table.

I suppose it's better than not being nice. But it takes strategic, intentional anti-racist action—it is a lifelong process that I will never be finished from.

The mainstream definition of a racist is an individual—always an individual, not a system—who consciously does not like people based on race—must be conscious—and intentionally seeks to be mean to them—must be intentional. And that definition, I believe, is the root of virtually all white defensiveness on this topic. It makes it virtually impossible to talk to the average white person about the inevitable absorption of a racist worldview that we get from living in a society in which racism is the foundation and the bedrock. And I'm going to use a term here that I understand is charged, and that's white supremacy. I'm very comfortable with the term. Yes, it includes extremists we might think of as white nationalists or neo-Nazis; it also is a highly descriptive sociological term for the water we swim in, for the society we live in. A society that holds white people up as the human ideal, as the norm for humanity, and everyone else as a particular "kind" of human—and a deficient one, right?

So I live in a society that, from the time I open my eyes, in myriad ways both implicit and explicit, has conveyed to me that I am inherently superior because I'm white. The research shows that all children by age three to four understand it's better to be white. All children. Me, I got that message. You got that message. Everyone gets it. You can't miss it. And it's not isolated, it's not singular, it's not dependent on any one person. It's relentlessly circulating.

And so internalized superiority is another great challenge or barrier for white people wanting to push through this or address this. We can talk about individualism and how that functions, and universalism and white solidarity, but I think the hardest one for us to face is internalized superiority. And yet, when you accept that you got that message, that you couldn't help it, you can then get to work trying to challenge that message, rather than inadvertently protect it through your defensiveness and your refusal to engage with it.

And so we simply can't get where we need to go from the current paradigm that says, "Only mean, intentional individuals could ever perpetrate or participate in racism." When you change your paradigm, it's so transformative and liberating. So what we need to do is think very differently about what racism is. To understand that, while I would never use the N word, my racial illiteracy was not benign, right?

My inability to think critically and deeply about racism before I engaged in this work actually ended up creating a hostile climate for the people of color in my life. My defensiveness based on my definition of a racist. Whenever people of color tried to talk to me about unaware assumptions I may be making or unintentional harm I may be perpetrating, I would lash back and refuse that. And that causes harm. So I think I try to be a little less white. I'm really clear that I am not going to be free of my conditioning, and racism is not going to end in my lifetime. The question I ask myself is how do I do a little less harm, and how do I know, right? Am I in any given moment behaving in anti-racist ways? Not "I'm already done, I'm never racist," right. Not "I'm a terrible person, I'm always racist."

In any given moment how am I doing, and how do I know? And that keeps me humble and it keeps me accountable. So for me to do less harm is no small thing, because it could literally be one more hour on a person of color's life who didn't have to take home my nonsense and agonize all night long whether it was worth it to talk to me or they should just suck it up yet again, lest they risk my lashing out in defensiveness. 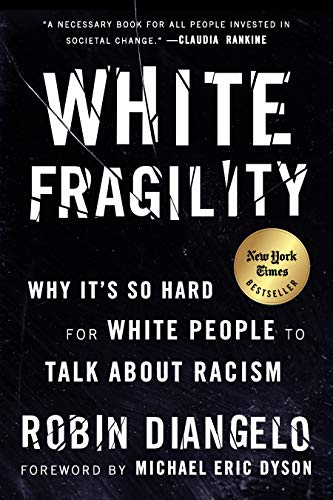 White Fragility: Why It's So Hard for White People to Talk About Racism
List Price: $16.00
New From: $10.59 in Stock
Used From: $10.10 in Stock
From Your Site Articles
Related Articles Around the Web
race sociology big problems inequality social change society united states