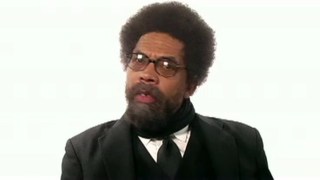 Why Cornel West Beat up His Third Grade Teacher

His third-grade teacher slapped him when he didn’t salute the flag, and he hit her back.

Question: Can you describe your upbringing?

Cornel West: Well, one, of course, I'm my momma's child and my daddy's kid. Irene and the late Clifton West. That West family is just so precious. I was saturated with love that's beyond description; I don't have the language; words cannot convey the kind of love that I received, and it was inseparable from Shiloh Baptist Church: Reverend Willie P. Cooke, my pastor; head of the deacon board, Deacon Hinton; my Sunday School teacher Sarah Ray. Fundamental for me. My Little League coach Mr. Peters, my cross-country coach Bill Mahan. I mean, all of these magnificent human being shaped me in fundamental ways. At the same time I was full of rage; I had a Robin Hood mentality that I tended to coerce people and take their money to make sure that people who had no money had something, because I couldn't stand to see the weak used and abused. And I was wrong to be coercive in that way, but I needed to find a positive channel for my rage.

I beat up my teacher when I was in the third grade, refused to salute the flag. Why? I had a great uncle who was lynched, and they wrapped his body with the U.S. flag as he hung from the tree in Jim Crow Texas. It was in my mind at eight years old, so I refused to salute the flag. Mrs. [IB], lovely teacher that she was, slapped me; I had a Joe Frazier counterpunch, hit her. The principal jumped on me, my brother and his partner jumped on the principal; a riot was on. Got kicked out of school. No school would take me. My mother was kind enough to have me take an I.Q. test; I got about 160-something, and they said, this little negro has some potential. They sent me over to another school across the way. So I went from the chocolate side of town to the vanilla side of town, Earl Warren Elementary School. Had a wonderful time. Two white sisters who were magnificent, Nona Sall and Cecilia Angell, helped me channel my rage. And so I'm still full of rage, but now it's a righteous indignation at injustice; it's not the kind of gangster orientation that's full of revenge and bitterness and so forth. That had something to do with the power of love, my Christian faith, which I hold onto and intend to be faithful unto death.

But it's self-styled; it goes through Chekov, it goes through Samuel Beckett, who are two of the great lapsed Christians, two of the great agnostics, probably two of the greatest writers of the 20th century, actually, Chekov and Beckett. Can't live without them. Kafka would be the other for me. Another agnostic in that sense. Full of love, though. Gregor Samsa in the Metamorphosis. Full of deep, loving compassion for family, especially his violin-playing sister Greta. They mean much to me. But it's the power of love, the power of education connecting life of the mind to struggle for justice. That's my story.