How to spot high-conflict people before it's too late

The countdown continues! This is the 6th most popular video of 2018 — and it could save you years of trouble.

Bill Eddy
Bill Eddy is the co-founder and president of the High Conflict Institute, a company devoted to helping individuals and organizations deal with high-conflict people. Eddy is a Certified Family Law Specialist and Senior Family Mediator at the National Conflict Resolution Center in San Diego. He is also a Licensed Clinical Social worker with twelve years' experience providing therapy to children, adults, couples and families in psychiatric hospitals and outpatient clinics.
28 December, 2018

BILL EDDY: What's interesting is high-conflict personalities seem to—we've really boiled it down to four key characteristics. The first and maybe the most stunning is a preoccupation with blaming other people. It's really, "It's all your fault,"—and you may have experienced this—"and it's not at all my fault". That's zero. "My part of the problem is zero." And that's how high-conflict people talk. And they'll say, "Don't you get it? It's all your fault."

A third is often, but not always, unmanaged emotions. And you may see that; people that just start yelling or just start crying or just storm out of a room—that kind of behavior we're seeing, but it's emotions that they're not managing.

And the fourth is extremes of behavior.

And one thing I talk about in the book 'Five Types of People' is this 90 percent rule, that 90 percent of people don't do some of the things that high-conflict people do. So if you see some shocking behavior and then the person makes an excuse for it, that's often the tip of the iceberg.

So it's preoccupation with blaming others, all-or-nothing thinking, unmanaged emotions, and extreme behaviors. That seems to be the pattern for high-conflict personalities. People that have those we call high-conflict people. But, by the way, don't tell them that you think that—that'll blow up in your face.

How to avoid being a target of blame? First of all, if you see warning signs of this behavior don't get too close to such a person. You may be a friend, but don't be the closest friend. You may be a co-worker, but don't be the closest co-worker. Because what seems to happen is the people they get really close to are the ones that are most at-risk of becoming their targets of blame.

Now the way to avoid becoming a target of blame is not getting too close to them but also not engaging in conflict with them. They often invite conflict, like they'll say outrageous things and you may feel like you've got to persuade them that they're wrong, and that's what I call a "forget about it". Just forget about it. You're not going to change their mind. If they're a difficult person, a high-conflict person, this is who they are, and you may not really even exist for them. So if you argue with them they're not going to change. So save yourself the trouble.

But when people challenge them is often when they turn against you, and they see you in their all-or-nothing eyes as "all bad". And so you don't want to have that kind of relationship.

So if you're in a personal relationship, family relationship, neighbor, co-worker, et cetera, you can manage relationships with these folks, but usually at an arm's length, and don't make it too confrontational. Don't say they have a high-conflict personality. Don't argue with them or try to convince them. Don't try to give them insight into themselves. You can just say, "Oh well, that's interesting. Hey, I've got to go now." Something like that. 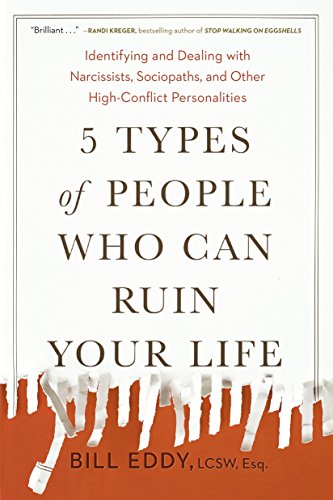 5 Types of People Who Can Ruin Your Life: Identifying and Dealing with Narcissists, Sociopaths, and Other High-Conflict Personalities
List Price: $16.00
New From: $7.23 in Stock
Used From: $6.59 in Stock
From Your Site Articles
Related Articles Around the Web
personality psychology emotions fear relationships friendship