Timothy Snyder is the Levin Professor of History at Yale University and the author of On Tyranny, Black Earth, and Bloodlands. His work has received the literature award of the[…]
Go to Profile 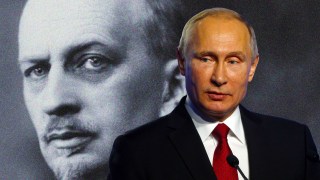 How does Vladimir Putin see the world? To understand how he controls Russia and pushes his agenda overseas, look to the works of 20th-century fascist philosopher Ivan Ilyin.
▸
5 min
—
with
Timothy Snyder

Some ideas lie dormant for decades, and such is the case with Russian philosopher Ivan Ilyin, whose anti-communist stance got him—along with about 160 other intellectuals—expelled from Soviet Russia in 1922 aboard the ‘philosopher’s ship’. So who was Ilyin, and why has Russia’s President Vladimir Putin breathed new life into his writings more than 60 years after Ilyin’s death? Yale University’s Professor Timothy Snyder gives a crash course in three pillars of Ilyin’s philosophy of fascism and explains why this worldview is so appealing to Putin: it defines freedom as knowing your set place in society, asserts that democracy is a ritual and not a reality, and maintains that there are no facts in the world—Russian nationalism is the only truth. Perhaps the most fascinating part of this is how new technology—like Facebook—is turning old fascism into political warfare. “The fundamental way that Russia works in American politics is by transmitting the idea that’s nothing is real… What the fascist ideas do with the new technology is they drive [Americans] into a situation where we think the real stakes of politics are all emotional and all about enemies—usually enemies at home,” says Snyder. Russia meddled in the 2016 U.S. election in such a way that Americans couldn’t see where the trouble was coming from. “A lot of us are still having a lot of trouble seeing what was happening,” he says. Snyder’s most recent book is The Road to Unfreedom: Russia, Europe, America.

Timothy Snyder: Ivan Ilyin was a fascist philosopher of the '20s, '30s, and '40s, but he’s probably the most important example of how old ideas can be brought back in the 21st century or in a postmodern context.

Ilyin had three very important ideas. The first was that social advancement was impossible because the political system, the social system, is like a body. So you’re a cell, you’re an embryo, you’re an organ, you have a place in this larger body, and freedom means knowing your place. That’s what freedom means.

A second idea that he had is that democracy is a ritual. So we can vote, but we only vote in order to affirm our collective support for a leader. The leader is not legitimated by our votes or chosen by our votes, the voting is just a ritual by which we collectively, every couple of years, endorse a leader who has emerged from some other place, from some—in fascism, a leader is some kind of hero who emerges from fiction, who emerges from myth.

The third idea Ilyin had, which is very useful, is that the factual world doesn’t count. It’s not real. Ilyin says that God created the world, but that was a mistake. The world was a kind of aborted process. The world is a horrifying thing because it’s full of this and that and the other thing, what we call facts, and those facts can’t be unified into some kind of larger whole so the world is actually horrifying, and those facts are disgusting and of no value whatsoever.

So, if you were Vladimir Putin and you’re governing as the head of an oligarchical clan it’s very comfortable to be able to say, “Well, look, freedom consists in knowing your place in society. There’s no possibility for social advance.”

And, likewise, if you can’t have the rule of law and if Russians are basically stuck in a certain place economically and politically, the idea that the world is not factual, that the world is just subjective, that it’s just a matter of this opinion, that opinion and the other opinion, is very comfortable.

And Ilyin adds the even more comfortable conclusion that the only true thing is Russian nationalism. The only hope to bring the whole world together is that somehow Russia—which is an innocent victim of the rest of the world—will somehow restore itself in some totalitarian form and then bring order back to the world.

So interestingly—it’s not the only thing which is going on—but interestingly these kinds of ideas help Mr. Putin as he consolidates a certain kind of authoritarianism by spectacle at home and also help him as he broadcasts it abroad.

The fundamental way that Russia works in American politics is by transmitting the idea that’s nothing is real. So it’s true that the Russians did support Trump. It’s true that there were all kinds of very specific interventions in the election of 2016. But the fundamental idea is to take new technology and transmit this old idea that we can’t really trust ourselves, that there aren’t really facts out there in the world, that the only thing that really matters is our preferences, or really our biases, or really our hatreds.

And this was so manifest in 2016 because it’s important that the Russians persuaded us in various things that weren’t true, but what’s more important is that we never thought that this could be happening as a result of action by some other country. We were entirely caught in our own little subjective American reality of “us and them”, where the friends and the enemies were all Americans; we couldn’t break out into any kind of larger world of factuality. The Russians precisely helped hem us in to a little, national, emotional world to the point where we couldn’t even see what was happening—and a lot of us are still having a lot of trouble seeing what was happening.

The interesting marriage, for me, is old ideas—fascist ideas, in fact—in a new world, a new world where it’s not that Mr. Putin or for that matter Mr. Trump wants us all to wear uniforms and march in the streets or even to have large-scale wars for territory, that’s not what’s going on.

But what the fascist ideas do with the new technology is they drive us into a situation where we think the real stakes of politics are all emotional and all about enemies, usually enemies at home, where we get ourselves all worked up about things, whether we like the government or not, but somehow we never leave our couch while we’re doing it, where we leave all of our energy right in front of the screen, basically, and don’t actually get out and vote or organize or think creatively about what policy might look like. And the result is that we end up consolidating this kind of oligarchy with some racial overtones, which is what America and Russia currently have in common.

Your brain invents its own code. Can we create an A.I. mind like that?