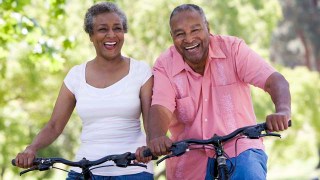 The Real Fountain of Youth: Exercise

One of the most effective ways of preserving your brain function as you get older is to stay healthy. Physical activity plays a role in preventing many diseases.

Question: How are aging and creativity related?

Patricia Bloom: I mean, certainly there are representative artists in all the fields who did blossom in later life. I think the ability to express one’s self artistically... again, it might be a worry and a question about social stereotyping, people might assume that people as they get older are going to decline in their capacity to be creatively expressive. So, if you talk to older actors about the ability to get roles in acting as an older actor, I think they would see that as greatly declining opportunity because our society has been bias against the older person in media and the arts. So, there’s a worry about being able to continue creative expression depending on the field that you’re in.

But having said that, with aging comes great life experience and there’s a lot of interest in what happens to brain function as people get older and a lot of worry about loss of memory and dementia. But there’s real data that wisdom that is something that is accrued with life experience, and so there’s that whole field of experience and wisdom which would kind of feed into creativity and the older person being able to manifest their life experience and their wisdom.

So I’d certainly like to believe that one’s ability to be creative and to grow... I mean, I think growing in new directions is kind of a hallmark of successful aging. So, some of the historically interesting figures who really aged well took up new forms of creative expression as they got older, like Grandma Moses, the artist. Albert Einstein I believe took up playing the violin late in life. And so, exploring new routes of creativity is one of the hallmarks of people who age well.

Question: What can people do to maintain their memory function later in life?

Patricia Bloom: One of the most effective ways of keeping your brain function as you get older is to stay healthy in general. We know that, for instance, all of the risk factors that you hear about for heart disease, for instance, high blood pressure, diabetes, smoking, you know having an inactive lifestyle. All of those things that put you at risk in other realms of health are also risk factors for brain disease and Alzheimer’s disease. So, staying healthy... it’s all the things that you kind of wish you didn’t have to do because they’re not the easy things to do. We all want to be able to pop a pill and that’s going to preserve our memory, but it’s really eating a healthy diet, staying physically active. If I had to say the one thing that people really should try to do beginning in early life that will have huge payback as they get older is creating habits of physical activity. You know, being an active person. That’s just... I call it the real fountain of youth. It really is. Exercise has been shown to prevent many diseases that are associated with aging and it’s also been shown to really maintain brain function as well.

So, eating a healthy diet, staying physically active, continuing to be mentally and socially engaged. Continuing to be involved in whatever is your passion, to really be engaged with life. Those have all been shown to really promote preserved brain function.

We still don’t know what really causes Alzheimer’s Disease and that is just a subject of a huge amount of research going on. So, of course it’s true that brilliant people get Alzheimer’s Disease and, you know, it’s a very tragic disease. But if you look at the whole population, if people pursued healthier lifestyles, that would be a big plus in terms of preserving brain function across the population.

Question: How does keeping active help?

Patricia Bloom: There is just reams of research data that prove that point, that physical activity is, as I said, it plays out as preventing many diseases. It’s a strong predictor of mortality. If you look at, and this has been shown in numerous research studies. If you look at people’s exercise capacity, how able they are to be vigorously active, it’s a very strong predictor for how long you live. And for each increment up on the scale you are for physical activity, the longer it would predict for your length of life.

The good news is that you don’t have to be a marathon runner. People get discouraged, they’re like, "Well I’ve been a couch potato all my life." But if you even go from the lowest quartile of physical activity to the second to the lowest quartile, you really improve your health status. And as I said, just a broad range of diseases, whether it’s hypertension, heart disease, colon cancer, depression, diabetes... I mean, I could read a long list, but all of those things are reduced in incidence in people that are physically active.

And I mean, that’s the tragedy too of what we’re seeing now. I really look at young people now, even kids. As a geriatrician, I’m really coming to see more and more that everything begins in early life. So, the fact that kids now aren’t active. They’re not going out to ride their bikes and explore the neighborhood. They’re sitting at home behind their computers. Which... there is some benefit there too, I think that modern day access to information is just remarkable. But kids not being physically active, recess being done away with at schools and the rate of childhood obesity is just terribly frightening. It’s considered one of the leading public health issues in this country, is the rate of childhood obesity. Because that is just going to play out into adults being obese. It’s already a huge number.

And it’s said that now, this next generation, as the Baby Boomers move into the elderly age group, it might start to be true that people start to live less long than their parents, and that’s going to be because obesity... which really a big part of it is that obesity will be leading to type II diabetes, and all of the problems with diabetes, and premature death.

So, you know, it’s really scary. So I kind of really applaud all of the efforts that are going on now too who try to turn that around. To reduce obesity, to get kids to be more active. I think that’s really going to be a key to what we’re seeing down the line in terms of the elderly.

Will Having Sex Prolong Your Life?