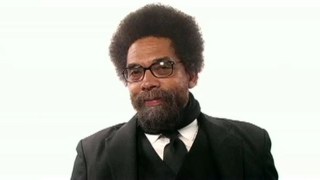 The Precarious Fate of Barack Obama

The president faces a choice, Cornell West says. He can be a masterful, Machiavellian politician like Bill Clinton or a great transformative leader like Abraham Lincoln.

Question: How do you imagine the legacy of Barack Obama?

Cornel West: I think that my dear brother Barack Obama, President Obama, he's a very complicated fellow. He has a sterling democratic rhetoric at his best that reminds you of Saul Alinsky and the others at times. He has a technocratic team when it comes to policy, so there's not just a tension but oftentimes there's contradictions between the two, you see. He comes out of a black tradition that has been explicit about telling the truth about white supremacy, but he himself holds race at arm's length until there's a crisis: Jamal right here, and Skip Gates there, you see. And it's partly because he's such a masterful politician. He's brilliant, he's charismatic, he's a masterful politician. And he's concerned about cutting the deal and winning the election. And I think in the end this is going to be a major challenge for him.

He has to decide whether he wants to be an Abe Lincoln, who began as a mediocre politician -- remember, Abe Lincoln supported the first proposed thirteenth Amendment that set slavery for ever in the U.S. Constitution. Frederick Douglas bought a ticket to go to Haiti; he said, I would never live in a nation that has an unamendable amendment. Lincoln supported that. That was opportunistic at the core; he hated slavery, but he was willing to say keep these people in slavery for ever to preserve the union. You see, that's not the Lincoln that we talk about as great. Lincoln became great because of Harriet Beecher Stowe, Wendell Phillips, Charles Sumner, who was beat up by Preston Brooks from South Carolina, Frederick Douglas, Sojourner Truth, Harriet Tubman. It was the abolitionist movement that helped make Lincoln great. Barack Obama has a choice between the greatness of a Lincoln and the masterful Machiavellian sensibilities of a Bill Clinton, who was brilliant, charismatic, masterful, but tended to be too opportunistic. So far, Barack Obama has leaned more toward the Clinton side than the Lincoln side. That was partly because he doesn't have an abolitionist movement equivalent. He doesn't have a social movement. That's what we need to do: we need to put pressure on him.

Cornel West: Well, it's a very good question. I mean, the kind of thing you're doing here on the Internet is very important, because it won't take the old traditional form of just hitting the streets. Hitting the streets will be one form; it's got to take a whole host of different forms, different voices, different views, different visions put forward, critiques of what's going on behind the scenes to reveal the contradictions of the Obama administration. We need young people who are looking at the world through a very different set of lenses than even myself, because I'm old-school, you know. And no school has the monopoly on truth. Yes, I do still see classes, and I see empires and so forth and so on. But there's also ways of looking at the world through popular culture that young people have that I don't fully understand, so that some of their criticisms would take forms that it will take me time to understand and grasp, you see. But we have to have the courage to not just raise our voices, but connect into organizations so that people can begin to see there are alternatives than the old neoliberalism dressed up in fashionable form, with a democratic rhetoric that hides a concealed technocratic policy. And it could be that, you know, Barack Obama himself, you know, he's waiting to make his turn toward Lincolnesque greatness. He hasn't made it yet, and of course the decision on Afghanistan is going to be very important. It's going to be difficult to have a peace prize and be a war president.

How Intellectuals Betrayed the Poor