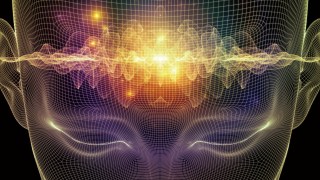 Beyond neuroanatomy and neurochemistry, flow states rely on shifts in the brain's neuroelectricity.
▸
1 min
—
with
Steven Kotler

Beyond neuroanatomy and neurochemistry, flow states rely on shifts in the brain’s neuroelectricity. The brain’s default state is one of waking consciouness. Flow alters your brain waves to sit on the border of daydreaming and dreaming.

Steven Kotler:  We’ve talked about neuroanatomy and we’ve talked about neurochemistry. The last bit is neuroelectricity. So what we now know happens in flow is our brainwaves which are kind of normally in waking consciousness up in beta – this is a fast moving wave. It gets really excited and you go up to kind of into stress responses, right. It moves down to alpha which is a daydreaming mode and then below that is theta. Theta is only accessible in the hypnagogic state as we’re starting to fall asleep or in dreaming, in REM sleep. Flow takes place on the border between alpha and theta. It just kind of hovers there so it’s a radical change in normal brain function. But something else really, really cool happens. So we talked earlier about how creativity is enhanced in flow. One of the other ways it is enhanced is when you’re on the border between alpha and theta because you’re in theta you can get a gamma spike. Gamma is coupled to the theta wave. It’s a very fast moving wave and it only shows up when ideas are coming together, when we have that aha moment, right. That’s a gamma spike. Gamma’s coupled with theta so it can only show up – you can only get that aha moment if you’re in theta. And flow by pushing us to the borderline between alpha and theta sort of sets us up to have massive startling insights.

The Neurochemistry of Flow States, with Steven Kotler