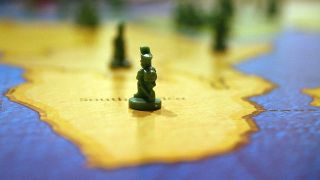 The Calculus of Risk-Taking

Every choice we make involves calculating the risk versus the reward, but if we mistake luck for skill, as was the case on Wall Street, these calculations become meaningless.

Question: Why do we take risks?

Laurence Gonzales: If you think about the idea of risk, it’s very simple.  In order to do anything, you have to take a risk of some kind.  So if you’re a baby, you know, you have to stand up, risk falling down in order to learn to walk.

Every time you eat something; you’re taking a risk of being poisoned.  You get married you risk divorce, you get a job you risk getting fired, everything’s a risk.  So how do you approach that?

Well I like to tell people to do what’s called a risk/reward loop.  You ask, what is my goal, what am I trying to achieve?  And then you ask, what am I willing to pay for that?  So for example, if you’re going, oh let’s say, white water rafting, you say, well what am I trying to achieve?  Am I going to be the world champion?  Am I just out for the weekend?  Am I willing to die for this thrill?  And the more you do that the more likely you are to come up with some reasonable system of checks and balances on those extreme risks that you might take.

If you’re just crossing an intersection for example, how much of a hurry are you in?  Are you willing to get a broken leg or a broken head to get across that intersection?

Question: Has your research given you any insight into the risk taking on Wall Street?

Laurence Gonzales: A lot of these principles of survival that I talk about can be easily applied to business and financial affairs and Wall Street.  And one of the things I frequently point out is that most people don’t do a good job of distinguishing between luck and skill.  If they do something and it works out to their benefit they say, “See how good I am?  I’m going to do it again.”  That’s the other thing that success does for you.

Success tells you you’re doing the right thing and it tells you to do it again.  So on Wall Street before the recent recession, traders were rewarded for doing very stupid things.  And it was pure luck, it was pure chance of the circumstances that they were rewarded and they did it again and again and again because it rewarded them again, and again.  And nobody ever stopped to say, boy this is really stupid, but I think I’ll do it again.  The reward made them think it was smart and that they were skilled instead of just being the victims of chance.  And of course, finally when the luck ran out, everybody collapsed.

How to Survive Airline Crashes and Other Extreme Scenarios