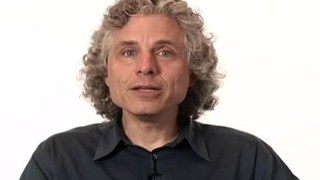 Steven Pinker on America’s Place in the World

Question: What is America’s role in the world?

Pinker:    If the United States has some role in spreading the values that we associate with the enlightenment – like tolerance, and reason, and skepticism and so on – then it clearly can’t hold itself as a . . . as exceptional.  It can’t say that there’s something uniquely special about the United States because it’s the United States and _________ anyone else to take that seriously.  In doing so, that would be immediately contradicting the very idea that it would be nice to spread – namely that no entity is special by virtue of being that entity.  It’s got to make its case to other entities that ________ are considered to be equal partners in the conversation.  So while I think it’s okay to say for the United States and other liberal democracies to say, “We found a system that works.  Here’s why it works. Here’s what’s good about it,” they can’t do it by virtue . . . by saying, “We’re going to impose it because we’re us and we can do that.”  Those two ideas are in contradiction.  The whole advantage of liberal democracy is that you make your case not because of who you are, but because you’ve got a good case and you can persuade others.  And you don’t privilege your own vantage point over theirs.

What is your outlook?