Stephan Jenkins is lead singer and guitarist for the Third Eye Blind, a San Francisco-based alt-rock group Jenkins founded in the early 90s. Although diagnosed with dyslexia as a child,[…]
Go to Profile 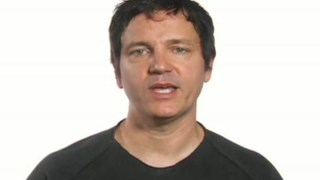 Stephan Jenkins describes the success of his latest project.

Jenkins:    What was different about making “Ursa Major,” “Ursa Major” is different in that it was all worked out from playing live in front of audiences at colleges, so it was not something that was so closed down, that was one big difference.  And I think that it came out of a period of self-doubt and coming out of that self-doubt and coming into a period of self-confidence, so both of those elements are there on this album.  And I also think that a lot of what I’ve done in the past has been very sort of internal, somewhere the locust is sort of deep in here and this, the locust of “Ursa Major” is more outward and more reacting to the connections with other people rather than just expressing what’s within me, so it’s probably not an emo record.  So far, it’s been surprisingly well received and I’m really pleased about that.  I’m really happy with the reaction that it’s had and I really hoped that people like it.  We believe in reaching people with music that is our mission and purpose and we hope that it makes people excited and happy.  That is the point of it is to… reach people and bring happiness through music.  That is what Third Eye Blind is trying to do.

Stephan Jenkins on the 90s