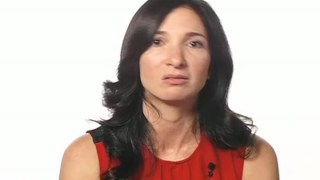 So, You Wanna Work on Wall Street?

Nomi Prins explains the pitfalls and power struggles that pervade life in the finance industry.

Question: Why did you leave Goldman Sachs to become a writer?

Nomi Prins: And I think along the way, I realized that I just really don’t feel in tune with what’s going on inside Wall Street firms with how things get done. With the sort of emptiness of the pursuit and the competition for making money, there was a lot of, in general, the bureaucracy that’s involved, the power plays that are involved, at some point I think I personally did not feel I wanted to be a part of that world and there are other external factors that took place as well for me, 9-11 really was one of the things that really got me to take stock, I think for a lot of people, in life, I was down on Wall Street at Goldman Sachs when that happened and at that point, I think it was like, well, I kind of don’t want to be here anyway and life’s too short and I really would rather do something that’s more fulfilling and perhaps, for me, and more enriching in general, than being a banker and making money on Wall Street.

Question: Do you feel it requires a great deal of intelligence to work on Wall Street?

Nomi Prins: I think it requires a great deal of stamina and a lot of backbone. It’s not an easy place to work, especially the higher you get in a firm, the more internal political battles become part of your day to day life. The more there is trying to take credit for certain trades versus other people in the firm trying to take credit for them, and all these tiny, little aspects of power plays that really take place and that requires to some extent, an intelligence, but also, the kind of backbone and the kind of real stamina and energy to deal with those kinds of day to day realities on Wall Street. It helps to be intelligent or quick minded, but it isn’t like Wall Street is rocket science. I mean, the reality is that how the rest of the world sees what Wall Street does seems to make it more complex than it really is inside. Things aren’t actually as complicated as they’re painted to be, I think, on the outside.

Question: Do you feel that women have as much control as men do?

Nomi Prins: I think that for anyone to have control in the banking industry, you have to be willing to fight and also play that same game, and unfortunately it is a game, rising in Wall Street is a game. It is positioning, it is strategizing, it is being good, it is being right, it is aligning with the right senior people who are moving up the chain, too. Because whether a woman or a man is attached to a particular manager, if that manager is not rising in the firm, they’re not going to do as well going forward probably as if they have aligned themselves with the sort of right team of ascent. And so a lot of that is intuition and it’s luck and it’s just, you know, staying in there and having that stamina, continuing to stand up for yourself. There isn’t a lot that’s given to anyone on Wall Street and whether you’re a woman or a man, the idea of standing up for yourself and continuing to be fighting in your own, sort of, behalf, is much more a part of it. And also asking for the same kinds of things that the people who become more powerful on Wall Street ask for. They ask for bigger positions and they ask for bigger bonuses and they demand a lot of what they ultimately get.

Question: Are there any differences in how men and women get ahead in the financial world?

Nomi Prins: Well, numerically it’s not necessarily a level playing field. Certainly the CEO’s in Wall Street today are all men and they have been all men. So there is a defining process by which at the top of a firm, there’s far more men in management positions than women. Usually it’s about fifty/fifty in terms of who goes into the firm, in terms of junior analysts that are hired into the analyst programs on Wall Street, whether they come from MBA programs or from other different types of degrees, it starts fifty/fity and as it sort of goes up the chain, it tends to weed out. When I was at Goldman as a managing director there, I think less than ten percent of the managing directors were women, and the number was between nine and twelve percent, sort of depending on the year, but that was really what happened as you sort of got up the firm. And certainly management, even senior more management positions than that, it’s even fewer. So to a lot of extent, there is a certain way you need to fight throughout a firm in general, whether you are a man or a woman and it does require a lot of continued focus and energy to really go up the chain. And plus, the fact that there are more men in management, I mean, they tend to choose men, because they’re like each other, to rise with them, and so what happens is it’s kind of a bit of a self-fulfilling situation. There’s more men in positions of power, they choose men who they understand and are like and hang out with in certain ways that women don’t hang out with them and don’t connect with them. And so they choose sort of their likenesses to come out. It’s sort of like a god-like thing, if it’s a likeness that comes up through the firm, and that tends to be, and it has been more men than women.