It takes more than a good idea to land a shark as a business partner.

DAYMOND JOHN: I get asked all the time what do I look for in a great pitch. Influence is the first thing. And somebody may say what do you mean influence? Well, how do you create influence for this pitch. Do you think it becomes stage one and then stage two? No. Influence is if you happen to be in an elevator with me and you didn't know you were ever going to meet Daymond John. You have 90 seconds and you pitch me. You're going to have to be able to tell me something fairly quickly how it's of interest to me and how you have done well with it and leave a card for me to look into you later on.

I'm going to go immediately to one of your social media accounts and that's where I'm going to either see if influence was planted over the years or not. What do you believe in? Who are you around? What are your causes? And I either look there and say I don't want this type of person in my life and I'll never call you back or I'll look there and say I've been looking for this person my entire life. This is a problem solving person that believes in the things that I believe in. And whether I work with this person or not they're going to be a success no matter what so I've got to find that person.

And then in regards to pitching people, it's not transactional at the moment. You almost never get anywhere in the initial pitch. People believe that they're supposed to walk away like Shark Tank with $500,000 or a million dollars. We do our due diligence when those people way after. 80 percent of those deals close and it takes anywhere from six to nine months to close. But did you create influence and then how was the negotiation? When you were talking to me did you listen to what I wanted or did you sit there and tell me your problems. Remember the old saying don't tell people your problems. 20 percent of people don't care, the other 80 percent are really happy that you have them. So make sure that throughout the negotiation you're communicating like your face is, one mouth, two ears. That means you talk once and you listen twice. Because the things that I'm saying at the table if you keep cutting me off or assuming you're never going to hear it because the most important things through communication when people are negotiating are in the last couple of words that they're saying. Remember, they're coming down this rabbit hole all the way to land right here and a lot of people aren't letting them land.

Are you making sure that you're helping me solve the problem by saying how can I make this easier for you? What are your obstacles? Where do you see this going? And that's the importance of negotiation. It's not a one transaction thing and it's all about it, what's in it for the other person on the other side of the table.

Various other things I look for in a pitch. I look for first of all confidence. I look for the fact that the person has went down the road, they have failed a couple of times but they act, they learn and then they repeat it. They still have passion about this project and they know all the other things they don't need to do. I look at the person themselves. Will they be a problem solver or a problem creator. So whether you're pitching me to come work in my office or you're pitching me to have a business with you, can I stand sitting next to you for eight hours a day, five days a week for the next five years of my life. And the reality is we want people around us who are going to be problem solvers. Swiss Army Knives, they're a specialist here but they also jump on the team and they're going to add other value to your life. So that even if this business fails we're going to do another business together. And those are the type of people.

They're also listening and they know how to transfer power to other people on the team and they're very, very open. They've done their homework and they say to me listen Mr. John, I want to do this business with you but I realize that you don't want tee shirts anymore because you have ten brands of tee shirts. You want other things and I've done this research. And this is how it adds to your portfolio. Because when you go and sell to a department store you'll take up more real estate. Instead of just a tee shirt area I have these electronics. You're already a vendor of record. You can take up more real estate in there and add it to my portfolio because that person did their homework and they showed how they can make more value to me and in return because I'm a vendor of record and I have manufacturing capabilities and I know the buyers. I can add more value to them and guess what? We'll both add more value to each other because hopefully we'll have a god business and make a lot of money.

Let me tell you about a pitch in the Tank that blew my socks off. These guys come in. The company's name is Bombas Socks. They're doing only $800,000 a year in business but every pair of socks that they sell they give away another pair to the homeless because the homeless has a big challenge on getting socks for their feet. Normally I don't want to do any other apparel business because I already have ten clothing brands and eight of them are dead. So the last thing I want is apparel. But the guys sell me on various different things. Number one, Mr. John, are you aware that we are a social cause brand and we are also growing at the same time, but you're going to be helping people. Okay. Are you aware that we have a new way to design and manufacture socks, seamless. Are you aware that we sell directly to our consumer and we don't need retail. I'm sitting in here going wait a minute. I used to give at the end of the year. But now every single time somebody buys I can give and I'm going to hit more people. They're going to show me how to manufacture socks better. They're going to show me how to talk directly to my customer with my other brands because now I won't be dependent on retail.

They're the number one brand that was ever invested in on Shark Tank doing over about $250 million a year. They've given over 30 million pairs of socks away. They've trained me and shown me another way to do business and they are great guys and we made money. And that's a perfect example of a powershift. 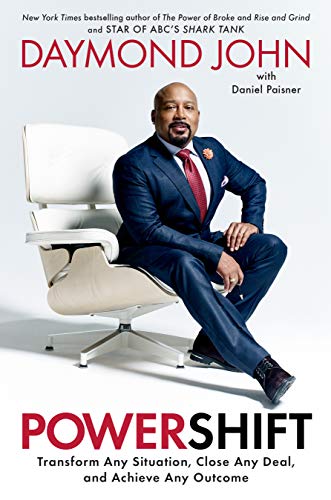