Salman Rushdie is a British-Indian novelist and writer, author of ten novels including Midnight’s Children (Booker Prize, 1981), Two Years Eight Months and Twenty-Eight Nights, and The Golden House. The publication of[…]
Go to Profile 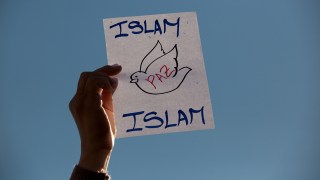 It is one thing not to discriminate against people, says Salman Rushdie, i.e. peaceful practitioners of Islam, but to foreclose an open debate over the merits of religion is a mistake.
▸
6 min
—
with
Salman Rushdie

It is one thing not to discriminate against people, says Salman Rushdie, i.e. peaceful practitioners of Islam, but to foreclose an open debate over the merits of religion is a mistake.

Salman Rushdie: I think there’s something very worried happening as it were on the left, you know. It used to be that it was the conservatives both in America and Europe who used to criticize people for criticizing religion, you know, that used to be a right wing politic. Now it’s become a left wing politic that somehow – and I think the argument goes that mostly groups in America and Western Europe are often economically disadvantaged and suffer from various kinds of prejudice and racism and have difficult lives and therefore to criticize the religion is to further attack them and that shouldn’t be done. And I mean that’s as best as I can put that argument and I think that was the argument in that Affleck issue. And I think it was the argument in the division within PEN American Center about honoring Charlie Hebdo and it crops up over and over again. I mean it happened just to a certain extent when the trouble was surrounding me. But actually less so than in those days the argument was – the criticisms were still mostly from the right, from people like, you know, the Cardinal of New York or the chief rabbi of Great Britain or the Pope, you know. All of whom found it perfectly possible to sympathize with Islamic religious leaders about me.

So and that taught me something interesting about the unity of the God Squad, you know. Now it seems that this liberal spirit of appeasement of political correctness is a new problem. Because of course it’s obviously quite right to say that communities that are discriminated against and oppressed and economically disadvantaged need to have those issues looked at, you know, and we need to try to deal with those issues. That’s not the same thing as saying you can’t criticize ideas they seem to hold. If you can’t ring fence ideas. It’s one thing to say people must not be discriminated against but to say that ideas become illegitimate or legitimate because they’re held by disadvantaged people is – it’s just a flaw. It’s very important to remember that when free expression is diminished or restricted it’s usually minority groups that suffer first. It’s their free expression that is restricted before the majorities.

So it’s always in the interest of minority communities to defend free expression because their own rights are involved. And if by doing that they have to put up with a certain amount of criticism of their own ideas then that just goes with the territory. And it’s very worrying to see well-meaning people, people who are coming from a good place, joining in with the world of censorship and therefore ending up in a very bad place. I think it’s perfectly legitimate to be highly critical of religion in general and in particular right now the use is being made of the Islamic religion because of, I mean, what’s happening in the world, you know. I think to say that that’s not to do with Islam is just a logical impossibility. Of course it is. If everybody engaged in acts of Islamic terrorism says that they’re doing it in the name of Islam who are we to say they’re not. I mean now of course what they mean by Islam might well not be what most Muslims mean by Islam. But it’s still a form of Islam and it’s a form of Islam that’s become unbelievably powerful in the last 25 and 30 years.

A form of Islam that if that oppresses and kills Muslims more than anyone else. That’s to say most of the Muslim deaths in the world right now are not caused by American drones. They’re caused by Islamic attacks on Muslims of another type, you know. Shiite attacks on Sunnis. Sunni attacks on Shiites. Most of the oppression of Muslims in the world right now is carried out by other Muslims, you know. Whether it’s the Taliban in Afghanistan or, you know, the Ayatollah or wherever it might be. But to say that this is not Islam is to misname the problem. The problem is that there’s been a mutation in Islam which has become unusually virulent and powerful. And it needs to be dealt with but in order to deal with it we have to first call it by its true name.

Hey Bill Nye! How Do We Know the Earth Is Round?