Rose McGowan is a thought leader and agent of change. As a writer, director, music artist, icon, entrepreneur, and feminist whistle-blower, she focused a spotlight on injustice and inequality in[…]
Go to Profile 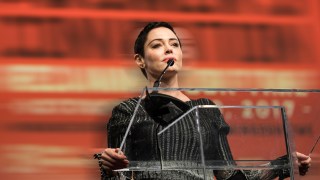 If we’re going to confront sexual abuse, we must confront abusers

Feminist, author, and whistle-blower Rose McGowan joins us for a wide-ranging talk about the myths behind sexual abuse and why it's never O.K. to label someone with loaded words.
▸
4 min
—
with
Rose McGowan

It’s hard to put a bio of Rose McGowan into one sentence. She is one of the whistle-blowers behind the anti-sexual-harassment movement sweeping the nation, and she is also one of the most visible voices of the #METOO / #TIMESUP movements. Rose McGowan is part people’s champion, part feminist orator, and, in our wide-ranging interview with her (of which is this part 1 of several), she is part cool-aunt that gives you incredibly solid life advice. Here, she talks with us about the myths behind sexual abuse. It’s not just a women’s issue, she says, it’s a people issue. And certain kinds of people seem to propagate the idea that it’s somehow O.K. to put other people into boxes. She posits this is part of the abusive cycle, and that it doesn’t have to be that way. Her marvelous new book is appropriately titled BRAVE.

Rose McGowan: I was in a Lyft—ironically, because Uber shut me out because I complained about sexual harassment before any of this came out, I was like “your driver just said something really creepy,” and they froze my account… I’ll start again.

So I was in a Lyft and it was about five days after the big New York Times Harvey Weinstein story broke.

And this is a metaphor. This is to help people understand what a victim of abuse goes through: First of all you have to understand that—let’s say there‘s a gazelle or an ibex and they’re chased by a lion, and they get away. Or they get nailed. Do you think it’s the first time they’ve been chased by a lion? This happens a lot.

This guy the driver, he couldn’t see me, I was behind him and I use a different name. And he was listening to news radio and it started talking about this, and he said out loud, “I don’t understand why those women couldn’t just have fought them off.”

And I said, “Sir,” I’m a disembodied voice to him, I said, “Have you ever been so scared that you froze like a statue?”

And he stopped, actually stopped the car; he pulled over—he still didn’t look at me—he went almost into this trance-y kind of state and he said, “Yes. I was ten. I was scared so badly my feet were clay. I couldn’t move. I’ve never felt anything like this. Is that what it’s like? Is that what happens to you?”
“Yes.”

But it doesn’t have to happen.

That’s the whole point of what I do. Just stop hurting us.

It’s like when I meet people and they’re like, “Oh, I’m not on the creative side,” and they’ll wave their hands at me as if it’s a disease.

And I think, how old were you when they took that from you?

How old were you when they told you the lie that you were one thing, and it belongs to a business card? “That’s you, that your identity.”

People keep referring to me as an actress. I’m like, I haven’t done that in a long time. I have no intention of ever doing it again. Also, I worked at a funeral home—That’s also not how I get introduced. I’ve done a lot of other things. A lot, I do many other things, but it’s just a classification system.

People think, you know, The New York Times reviewed my book and people are like “What a great review.” I was annoyed by it. I thought, “That was stupid. This person with their khaki-pants brain is not understanding my point. How annoying.”

The last sentence was, “Oh, this should be great for teenage girls.”

Fuck you. You can cut that out, I’m sure.

No, it’s not great “for teenage girls.” It will be—as an addendum.

The kids are alright, it’s all y’all, that’s who I’m talking to. We just need to have a conversation. I really just wanted to have a Gertrude Stein-esque conversation with the world, but not have it only be snooty people. It’s not that complicated.

Einstein and the day the Earth stood still