Richard O. Prum is an evolutionary ornithologist with broad interests in avian biology. He is the William Robertson Coe Professor of Ornithology at Yale University, and the Head Curator of[…]
Go to Profile 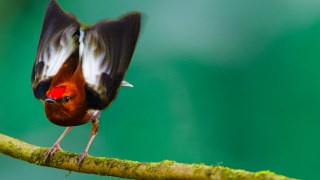 Does being beautiful mean dying sooner? In nature, it can.

The beautiful courtship rituals of the Club-winged Manakin leave both the male and the female worse off physically, says evolutionary ornithologist Richard O. Prum.
▸
4 min
—
with
Richard Prum

The courtship rituals of the Club-winged Manakin leave both the male and the female worse off physically, says evolutionary ornithologist Richard O. Prum. And yet, it’s one of the most beautiful mating habits around. Sometimes, evolution by mate choice can work in an opposing direction to natural selection, guided more by beauty than what is practical.

Richard Prum: One of the most extraordinary examples of beauty happening in the natural world is the courtship display song of the Club-winged Manakin. The club-winged manakin is a South American bird that sings with its wings. The female club-winged does all the nesting and builds the nest and lays the eggs and takes care of them all on her own, but she chooses among available mates based on the songs they sing. But they sing with their wing feathers in a very special way: by shaking their wing feathers rapidly over their back they create an “electronic” sound that sounds like “Bip! Bip! WAAANG” that rings out of the forest, and yet this is actually produced by the wing feathers rubbing together.

This is interesting because it shows that beauty can be innovative. Birds have been singing songs, vocal songs with their syrinx for something like 80 million years, but this bird has essentially abandoned vocal songs to create music in a whole new way with its wing feathers.

Studies have shown that as we look inside the body of the male club-winged manakin the wing bones have been greatly altered in order to make this sound. What this means is that beauty is not only skin deep: in order to make these beautiful attractive sounds the wing bones have become elaborated and even solid like ivory. This is a big deal because all birds have hollow wing bones: even Velociraptor and T Rex have hollow arm bones, so this is a design that goes back prior to the origin of birds and prior to the origin of flight! But flying birds all maintained hollow wing bones, but somehow or other the male club-winged manakin has abandoned them in order to produce his wing song.

This is interesting because his wing bones are actually made worse at flying by the compromise to be beautiful, in order to make the songs that females love. Then the male has been dragged off that optimal design toward a new design, which functions less well at flying; in other words the male has been made less capable at flight by female choice. That kind of investment or cost COULD be rationalized as another kind of “honesty,” a kind of handicap that indicates how good he is, that he can waste energy to make the wing bones. I wanted to test that idea by exploring what’s going on in female club-winged manakins.

It turns out that female club wings have the same elaborate, thickened, or wider wing bones as the males, yet they will never sing a wing song.

How does that work? Well, it turns out that the wing bones develop in the embryo in the egg before the embryo becomes either male or female. And as a result when the female selects on the males that she likes with the song that she likes, her female offspring will also inherit bizarre wing bones, and yet they won’t be made better by them. They will never profit from them. So in this case of the club-winged manakin, both males and females are made worse off as a result of mate choice. I call this the “evolution of decadence”. It’s an example of how mate choice or evolution by mate choice can work in an entirely opposite or opposing direction to natural selection. I think that’s a case where we are driven to accept the idea that beauty happens.

Economics before romance: How marriage differs in poor countries