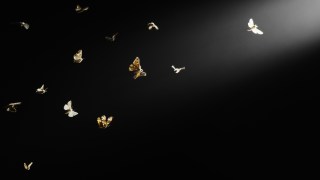 Do We Need Religion to Survive? Is That Even the Right Question?

What is the Darwinian survival value of religion? That’s not the right question, says Richard Dawkins. To find the right question, he relies on an evolutionary analogy: Why do moths fly into flames? It means instant death, so what’s the evolutionary value of this kamikaze behavior? Dawkins delivers a crash course in proximate and ultimate causality, two very important distinctions in biology. Moths evolved to navigate using celestial objects as compasses. The moon and the stars emit parallel light, a very reliable and consistent beam, meaning a moth can fly in a straight line guided by that light. Candle light is an entirely different source that emits light in a spiral… leading straight to the hottest part of the flame. These moths aren’t suicidal, says Dawkins, it’s a misfiring of an evolutionary trait because of a modern technology in their environment. “The right question is not, ‘What’s the survival value of a suicidal behavior in moths?'” he says, “The right question is, ‘What is the survival value of having the kind of physiology which, under some circumstances, leads you to fly into a flames?'” There survival value of religious behavior may be at the genetic level, Dawkins suggests, and the proximate question in this case would be: what part of our brain does religion serve, and is religion really the only way that function is manifested? Richard Dawkins’ new book is Science in the Soul: Selected Writings of a Passionate Rationalist.

If you actually look at the way moth and insect eyes generally work, insects use celestial objects like the sun or the moon or the stars as compasses. It’s important, it’s valuable, there is survival value for any animal moving in a straight line. If an animal wants to move in a straight line, a very good way to do it is to keep a celestial object at a fixed angle, and that’s easy to do in insects because they have compound eyes, very unlike our eyes. Their eye is a whole sort of hemisphere of little tubes looking outwards, and so you can maintain a fixed angle to something like a star or the moon by keeping the moon in one ommatidium. If you do that, because rays from the moon come from optical infinity, they’re parallel, and so if you keep of the moon in one ommatidium you will fly in a straight line. It might be say 30 degrees; keep the moon at 30 degrees to your right. And that works, and that’s valuable, and that’s what many insects do.
However, candles are not at optical infinity, candles are close. The rays of light from a candle are therefore not parallel, they are radiating out. If you maintain a fixed angle of say 30 degrees to the rays that are emitted from a candle you will describe a neat logarithmic spiral into the candle flame and kill yourself.

So these moths are not killing themselves, it’s not suicidal behavior; it’s a misfiring of a natural, normal behavior, which before the invention of candles would have worked. And it still does work the vast majority of time because most of the time in the dark a moth is not subjected to artificial light. So ask the right question. The right question is not, 'What’s the survival value of a suicidal behavior in moths?' the right question is, 'What’s the survival value of maintaining a fixed angle to a celestial object?' and then it’s easy to come up with the right answer.
Proximate questions are questions which you answer with the physiology of the animal, the nervous system of the animal, and the hormones of the animal—things happen in the animal’s nervous system which cause it to do something. That’s the proximal answer. The ultimate question is, “What’s the survival value? What’s the benefit to the animal? What’s the benefit to the animal’s genes, in particular, to make it do that?”

An old teacher of mine at Oxford, J.R. Baker, used the example of breeding seasons in birds. Why do birds breed at certain times of year? The ultimate answer is: it’s beneficial to them to have breeding seasons because they produce chicks at the right time of year to cash in on the optimal food supply. That’s the ultimate answer. The proximate answer is that they breed at a certain time of year because day length is changing and their hormonal system, their nervous system is geared to day length and that’s the proximal reason why they breed at a certain time.

Divide and Conquer: The Bipartisan Plan to Break America