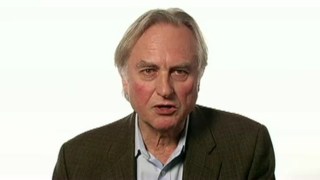 Richard Dawkins Can Pass as a Cricket

While Richard Dawkins has gone on to lead one of the more prolific scientific careers in modern times, one of his earlier projects remains lost and incomplete. Here, he recounts his work in the field gathering cricket songs—even doing some great impressions.

Question: Have you ever started any projects that were did not complete?

Richard Dawkins: Yes. I have begun several projects which were never completed, not necessarily because they failed, but because I got interested in other things. And some of them were looking quite promising. For example, I began a project on the song of crickets; this was when I was still working in a department of animal behavior. Crickets sing by vibrating their wings against each other, and different species of crickets have a different pattern of song, which they control by the movement of the wings. And I was working on South Pacific crickets -- not in the South Pacific; I had a colony of them in Oxford. And this particular cricket, Teleogryllus oceanicus, has a rather complicated song. It says PRR-prr-prr-prr-prr-prr-prr, PRR-prr-prr-prr-prr-prr-prr, PRR-prr-prr-prr-prr-prr. And that just goes on and on and on. And I wanted to know how important the details of that song were. Did it really have to have that particular pattern? And the answer was probably yes, because it was unique to that species. Related species have a different kind of song. For example, Teleogryllus commodus, a related species, said PRR-prr, PRR-prr, PRR-prr. And presumably the difference between those two crickets was significant. What I did was to write a computer program to make a computer sing like a cricket, and in which you could easily program in, using a simple sort of language which I devised, for making any cricket song you like.

So, I was able to program quickly the song of Teleogryllus oceanicus, Teleogryllus commodus, various species of gryllus and so on. And then I devised a method for measuring the attractiveness of these songs, and it was a very light seesaw made of sort of balsa wood, very light balsa wood, and at each end of the seesaw was a loudspeaker which could be made to play artificial cricket song. And you put a cricket inside the seesaw. As the cricket walked along the seesaw towards the song, the seesaw tilted and made an electrical contact, which was counted as one approach to that loudspeaker. At that point or shortly afterwards, the computer would change to making the song come out of the other loudspeaker, whereupon the cricket would turn around and walk the other way, and then the seesaw would tilt the other way. So the number of tilts of the seesaw was a measure of the attractiveness of the song. So I had it all set up to measure the rival attractiveness of different kinds of song. But then I can't remember what happened, and I switched to some other piece of research. So that piece of research was never actually done. But the apparatus that I developed and the computer program that I wrote to sing like a cricket was all working. Now it's lost for ever because it was done on now-outdated computers. You can't get that kind of computer any more. And so that's gone.