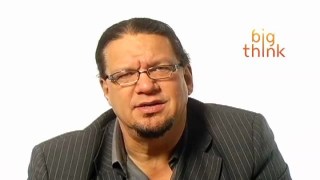 Reading the Bible (Or the Koran, Or the Torah) Will Make You an Atheist

Author and magician Penn Jillette explains how his studiousness as a teenager led to his becoming an atheist.
▸
6 min
—
with
Penn Jillette

Author and magician Penn Jillette was asked to leave his Christian youth group by a pastor who told his parents: “He’s no longer learning about the Bible from me. He is now converting everyone in the class to atheism.” The reason? Jillette did his homework and was turned off by the hostilities of the text. It can be intimidating to come out as an atheist, especially in a religious community. Jillette found that having “out” atheist role models helped him feel unalone.

Question: How did you become an atheist?

Penn Jillette: In my church group in Greenfield, Massachusetts at the age of about 16 or 17, I had made a deal with my mom and dad—I was very, very close to my mom and dad. I'm a real momma's boy and got along with them my whole life, hardly even rough periods. And they went to the Congregationalist church: The Church of the Covered Dish Supper in Greenfield, Massachusetts. Massachusetts is an old enough state that you could not charter a town without having a Congregationalist church and this was the first one in out town. I mean, from back 200 years ago.

And I made a deal with my mom and dad that I wouldn't have to go to church services Sunday morning if I went to youth group Sunday night. So we had a pastor—that minister at that church—that was fairly hip, you know, he was trying to deal with the children, play a Jim Morrison song once in a while. Played the Beatles. Far out! And he sincerely wanted us to do some inquiry into theological questions and I took it very seriously. I may have been the only in the youth group that did take it seriously and I read the Bible cover-to-cover and I think that anyone who is thinking about maybe being an atheist... if you read the Bible or the Koran or the Torah cover-to-cover I believe you will emerge from that as an atheist. I mean, you can read The God Delusion by Richard Dawkins, you can read God Is Not Great by Hitchens... but the Bible itself, will turn you atheist faster than anything.

Question: Why would reading the Bible make you an atheist?

Penn Jillette: I think because what we get told about the Bible is a lot of picking and choosing, when you see, you know, Lot's daughter gang raped and beaten, and the Lord being okay with that; when you actually read about Abraham being willing to kill his son, when you actually read that; when you read the insanity of the talking snake; when you read the hostility towards homosexuals, towards women, the celebration of slavery; when you read in context, that "thou shalt not kill" means only in your own tribe—I mean, there's no hint that it means humanity in general; that there's no sense of a shared humanity, it's all tribal; when you see a God that is jealous and insecure; when you see that there's contradictions that show that it was clearly written hundreds of years after the supposed fact and full of contradictions.  I think that anybody... you know, it's like reading The Constitution of the United States of America. It's been... it's in English. You know, you don't need someone to hold your hand. Just pick it up and read it. Just read what the First Amendment says and then read what the Bible says. Going back to the source material is always the best.

When someone is trying to interpret something for you, they always have an agenda. So I read the Bible and then I read Bertrand Russell and I read a lot of other stuff because in the Greenfield public library the 900's of the Dewey Decimal System... I mean, one of the few people that still remembers it, the 900's are theology. They're only about this long but that's all on camera. Only about this long, the one armed guy who caught a fish this big. They're only about this long and so I read a lot of them. I started going go to class and, to his credit, the pastor who was a wonderful man, wonderful man would let me talk to him about this stuff.

And finally after—I don't know, it's so long ago—but after months of this platonic questioning every night at youth group, the minister called my mom and dad and said, "You know, I think maybe Penn should stop coming to youth group, he's no longer learning about the Bible from me. He is now converting everyone in the class to atheism." So I was asked to leave—very politely, very nicely—youth group. And then with the help of Martin Mull, Randy Newman, Frank Zappa, the idea that these three men were out-of-the-closet atheists was so inspiring to me and so important to me. And reading interviews with somebody...

And I remember being somebody in a religious—and not a religious community like wack jobs, but, you know, in a community where most everyone was Christian—having those people in interviews say the simple sentence "There is no God" meant the world to me and gave me joy and gave me passion and gave me love and gave me confidence. And I think the first time I was interviewed, as presumptuous as this seems—and please forgive me—I remembered Frank Zappa's interviews. And I wanted to give a chance for someone else reading that to not feel they were alone. Now that's less important now. I mean, the population of atheists in this country is going through the roof. I mean, I'm now on the side that's winning.

It's over 20 percent by some polls and I believe if you counted atheism as a religion it's the fastest growing religion in the history of the United States of America. So now I'm on the team that's winning which is an uncomfortable position for me. But back, you know, 30 years ago, 40 years ago, it still felt like it meant something, you know, it's... we're several years behind gay rights but we're following a much faster path at acceptance.

How Penn Jillette Prepares for a Show