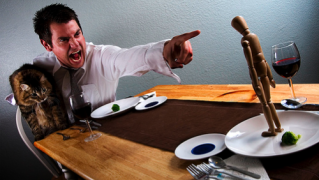 Paul Bloom has researched everything from religion and moral reasoning to children’s understanding of fiction and art. What’s the most unusual project he’s working on now?

Question: What’s the most unusual or exciting project you’re working on now?

Paul Bloom: There's a lot going on in my lab that I'm very, very excited about. I'll tell you about one study that's kind of cool, and it's with a graduate student named ****. We're interested in whether children will punish other people. Now that much we actually know, that they do. But the further question is, will they punish other people and suffer to do it? So the design that we came up with is, we put children in a room, we're testing four and five year olds, and we show them somebody in another room who behaves horribly, she knocks over someone else's blocks, she laughs, she's terrible. And we tell the child, and that person says, "I can't wait for my broccoli, I have a big plate of broccoli coming, I can't wait for it." And then the experimenter goes over to the child with a big plate of broccoli and says, "I'm going to bring this over to that person, you want to eat some of it?" And it's set up so that children know that if they eat it, that person won't get their broccoli. And we also know that the kids hate the broccoli, for the most part, we also test them to see if they hate the broccoli. The question we're interested in is will they force broccoli down their mouths to punish a stranger? Are they that instinctively spiteful? And right now, the data looks promising. We have some lovely film clips of children cramming broccoli into their mouth, almost weeping, because they hate the stuff, so as to stop this other person from getting it.

And I think, this is just part of a line of studies that show how powerful our moral impulses are, how deep the desire to reward the good and punish the bad run in all of us, including young children.