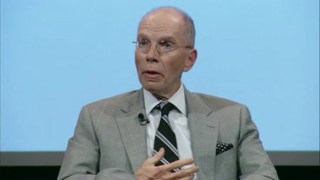 According to Jeff Koplan, some form of universal healthcare coverage, as proposed by the Obama administration, would encourage previously uninsured or under-insured people to visit doctors when they’re sick, and would thus be a preventative strike against future pandemics.

Audience member: One of you mentioned some of the clinical challenges of pandemics, and about how the healthcare system isn’t quite ready to handle a huge pandemic. How might the current healthcare reform present challenges and opportunities for pandemics in the future?

Jeff Koplan: Oh you’ve hit the nail right on the head. When we talk about being prepared, that area we are least prepared with, is taking care of people at the early stages of their illness, because of the large number of people who won’t come in because they’re uninsured or underinsured.

And people tend not to think of the healthcare system as an element of this problem in being prepared. But the speed with which we recognize new cases in any outbreak, not just influenza, but an anthrax attack, bio-terrorism event, SARS [severe acute respiratory syndrome], it’s extremely important in control measures. And the longer you get significant pockets of population not coming for care when they become ill is a serious problem for these type of pandemics.

So I think healthcare reform that provides some level of universal coverage with people, and encourages them to come in when they’re sick at early stages, is extremely important in these control areas.

▸
2 min
—
with
Ecologist and Evolutionary Biologist, University of Arizona