If you feel like you're on a hamster wheel in life, it might be time for a powershift.

DAYMOND JOHN: Powershift. It's the ability that we all have, but people have to learn to navigate it. Power shift is the fact that the only difference between you or me or myself or somebody else on why they've gotten to this part of their life or another part of their life is their ability to retain power as well as give it to other people that they work with. And it comes in three different stages. One is you must build influence. The next is, of course, the negotiation and the exchanging of energy and/or deals. And the third which a lot of people do not ever recognize is the nurturing of a relationship to make that relationship more and more effective and productive over the history of your relationship. And when you think about powershift, this is not only about being at a negotiation table and being very transactional. This is in a relationship. This is the mentality that you are educating yourself before you go out in the world because a lot of us, even myself, we suffer from self-doubt from here and there. So powershift is being able to transform your mind and being able to use the things you have at your disposal to get what you want and where you want.

When you think of what a life or career looks like without people understanding how to shift power and powershift, it is the masses who get on the train or whatever the case is every single day and work and go to a dead end job. Or they're in a relationship, they don't know why. Or they're on a treadmill or a hamster wheel moving along with no compass, no navigation, no autopilot on what are they going to do if they ever get to this destination. What do they want in life? Are they doing this for themselves? Are they doing this for others? Did they allow somebody to marginalize them and/or take power away from them? Did they give it to somebody who never ever valued it and now they don't have it themselves. And they blink their eye and their entire life has gone away and they felt like they had no purpose in life. And that is what happens when somebody does not tap into their 'why,' does not maximize their relationships and does not really nurture those relationships afterwards.

A life and a career of somebody who has understood the power of shifting power is a life of trial and error, a life of educating themselves, a life of surrounding themselves with likeminded people, a life of seeking more. Understanding their why and what is the purpose that's driving them. When they get to that place that they want to be what was the purpose. It is a life of enriching other people in their community and their office and their church, in their relationship. It is understanding that when you're negotiating it's what's in it for the other party as well and it's not just self-serving. It's also being able to understand that in a relationship, no matter what it is, you're Batman, somebody else is Robin, and often you're Robin and you allow somebody else to be Batman. And it makes you much more powerful. And that's what you see in the most successful people in the world. And success is not only money. Success can be various other things. People who have overthrown government with Twitter, arguments say.

So when people understand their power, they're constantly seeking to enrich more people as well as tapping into what they've learned and how to even become better at being powerful. And there's a lot of things around that are there right in front of your face. How to negotiate with power meaning what is the body language? What is the other person telling you? What are you not listening to that you should be looking for? A lot of times people just don't ask the right questions. Instead they're just stating what they want instead of saying how can this situation be better? What do you need for this situation? What are your obstacles? Making other people feel like you care to accomplish the same goal. 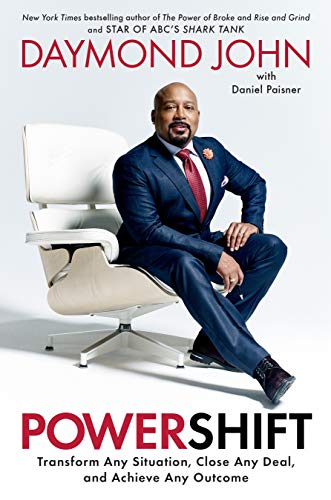 Powershift: Transform Any Situation, Close Any Deal, and Achieve Any Outcome
List Price: $19.58
New From: $19.25 in Stock
Used From: $19.67 in Stock
From Your Site Articles
Related Articles Around the Web
entrepreneur happiness investment leadership personal growth relationships success work