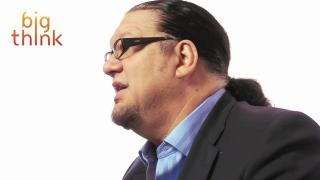 Penn Jillette answers Big Thinker Adam Lee’s question about how he reconciles two world views: his atheism with his libertarianism.

Penn Jillette:  This is one of the places that I seem to disagree with Richard Dawkins.  Whenever you disagree with Richard Dawkins, the chances are, you’re wrong.  Dawkins seems to think that the state can come in and have the authority to decide truth or not truth.  He seems to think that the teaching of evolution is really, really important and that the state should do it.  I think historically, we see them replace religion with the state; things go way, way badly.

I believe, and I may be wrong on this, but I think that individuals care desperately about education.  I think there’s a condescending quality that has to do with we have to educate the masses because we know better.  And I believe that all the tools are in place for people to learn on their own.

I think that the whole idea that the state has to bestow upon children enlightenment maybe outdated.  I think that Moore’s Law and the way WiFi is proliferating and how cheap things are getting.  And how far the level of poverty is coming up.  I mean, people are considered to be in a poverty level in the U.S. have cell phones and I’m not saying that in any sort of, they’re not really poor.  They really are wicked poor, and terribly poor, but they do have cell phones.  And information is there and education is there.  And I think that education is going to come from the web.

I mean, my children go to a fancy-ass, expensive private school, but I see them going on the internet and learning more than they do in that environment.  I would like to think that people are overwhelmingly good and that charity works and that we will help each other.  And I think that the image that’s portrayed in that question of a Libertarian state being a huge disparity of income doesn’t seem completely accurate.  The disparity that we have not is not coming… they pretend that the Bush years were years of no regulation and freedom and kind of Libertarian, but there’s no evidence of that.

What we have now is not rich people who are working outside the law, but rich people who are gaming the system.  You know, all the problems we’ve had have not been that they’re not regulated, but that they’re working the regulation in their benefit.  We’ve had people that have made huge mistakes and then are rewarded for it.  We’ve done huge bailouts of people that should have crashed and burned.  And they make this deal with you.  And I don’t think it’s ever stated this way, although it may be… it may actually be stated this way, where they kind of say - if you play into the system and if you let us regulate you and if we let you do what you… if you do what we want, we will guarantee you won’t go out of business.  We will buoy you up, we will help you, we’ll give you tax breaks; we’ll do all of this.

And there’s a view of Libertarianism that it is somehow everybody wants what happened during the Bush Administration to continue and more so.  Every Libertarian I know hated the Bush Administration.  It did not seem fair; it did not seem small government.  It was not small government.  It was people getting in bed with the government to do this phony, crony capitalism.

Without the government watching over, holding on to things and “too big to fail,” thinks just go up and down and rich people take more of a roller coaster ride than poor people.

My point of view on Libertarianism is, first, let’s stop the things we all agree need to be stopped.  Let’s stop, as my partner Teller says, “Let’s stop spending money we don’t have to kill people we don’t know for reasons we don’t understand.”  Let’s just stop killing people, that’s really expensive.  And Bush and Obama did a lot of that.

Then let’s stop… let’s stop all the bailing out of rich people.  Let’s stop all the, ‘we’ve got to help people get jobs by giving money to these rich people,’ planning on trickle down from the government.  Let’s stop that, you know, as Harry Brown, the Libertarian candidate from 20 years ago used to say, “We spend all this money on tobacco subsidies and all this money educating people not to smoke.”  Let’s just stop one of them.  We don’t care to begin with, just stop one of them.  And I think then, we whittle it down and then, you know, you can make your argument that we still need education, that we still need libraries, that we still need infrastructure.  And you’ll probably win with me.

Can we just stop the stuff that big government’s doing that we really know is bad?