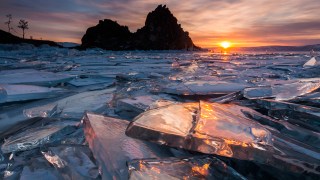 Global Warming Forecast: Cloudy With a Chance of Forced Migration and Obedience to Russia

If global temperatures rise by just four degrees celsius, the forecast is cloudy with a chance of obliteration.
▸
6 min
—
with
Parag Khanna

Global warming is no longer the problem of our children. Many of us will still be here in 30 to 40 years to feel the blistering heat and deal with the ensuing problems. The weather, of course, is one of them. Changes of just a few degrees lead to less water, and farmers struggling to successfully grow their crops to harvest.

If the heat keeps rising the way it has now, by 2040 to 2050 there will be a huge downturn in food and water supplies. And we’ll all be older, wiser, and wondering what else we could have done to lessen the blow. The changes are already evident, as Parag Khanna points out: there’s a lack of sufficient water irrigation and fresh water supply for agriculture in Australia, and water tables falling in the western United States.

According to Khanna – who is a CNN Global Contributor, author, and a global strategist – right now the United States, Brazil, China, India, and Australia are leading the way in food production. But with changing weather patterns and water shortages, this is going to change. Desertification can, and most likely will, set in, killing off the major farms. This means the bigger food suppliers will have to move up north, in places such as Russia and Canada. These two countries have the biggest land masses in the world but are largely empty, with most of their populations packed into relatively small urban areas. And because they’re already cold, the rising worldwide temperature may work in these areas’ favor. But Khanna asks: who will live there, in these remote places with no infrastructure? Will there be population transfers and mass migrations for people to work in the agricultural sector?

A second kind of migration in reaction to climate change will shift the global population away from the shores. We are a coast-loving civilization. When populating new cities, colonists typically stayed on the shores or followed rivers. These colonies, that became megacities, are dependent on trade, which will be handy for when the food supply changes origins. But not so much as the sea levels continue to rise. Many people may be forced inland, and to elevated ground, dragging what they can of their cities with them before we end up with thousands of new Atlantis-es.

Parag Khanna’s most recent book is Connectography: Mapping the Future of Global Civilization. Parag Khanna:  If global temperatures rise four degrees Celsius above the 1990 baseline temperature level used by the Intergovernmental Panel on Climate Change, the IPCC, and that may happen by 2040, 2050 or around that time based on present temperature sort of rise trajectory. That would have a very devastating impact on global food production. Right now the countries of the world that are the largest food producers such as the United States, Brazil, China, India, Australia – if the temperature rise by four degrees Celsius several decades from now it could be that the food production is generally wiped out in many of those geographies because of desertification, crop failure and so forth. Already there’s a lack of sufficient water irrigation and fresh water supply for agriculture in Australia. We see water tables falling in the western United States and so forth. Meanwhile if temperatures do rise to that degree and in fact temperatures rise the fastest in the northern latitudes of the world and the southern latitudes in other words at the poles. Whereas sea levels rise fastest at the equator. And so what we’ll find is that in a world that’s four degrees Celsius warmer a large amount of the world’s food production is predicted to take place in today’s Canada and Russia.

Now Canada and Russia are the two largest countries in the world by geographic territory. But they are also perhaps ironically two of the world’s most depopulated countries. Their populations are very small and very concentrated in very, very small areas. Most of the Canadian population for example lives very close to the United States border. And most of Russia’s population lives west of the Euro mountains very close to Eastern Europe. Whereas about six-sevenths of Russia’s territory, this vast geography known, a large chunk of it is known as Siberia for example is largely uninhabited. But if you project forward where food will be grown in a world that is that much warmer in fact these depopulated areas of Canada and Russia may be the world’s breadbaskets. The problem is there’s no people. And so of course we would have to think about who are the people who are going to live there? Might we need to have population transfers and mass migrations for people to work in the agricultural sector or to develop the agribusiness industries of these countries to feed the planet.

Because after all it will not be the United States and Canada, the United States and China and India and Australia and Brazil that are feeding the world. It’ll be Canada and Russia that are feeding the world. So the food supply chain on a global basis is going to shift and move and become much more dependent on these northern geographies. And so this is the prediction that a number of scientists have made and that’s of course going to require a significant rethinking of the meaning of political geography when we depend so much on just two countries for our food.

The second great megatrend of the twenty-first century besides global connectivity of infrastructure is mass urbanization. The rate at which people are moving into cities has never been so rapid. And it’s happening all over the world, particularly in developing countries – in Africa, in south Asia, in East Asia. On an aggregate basis most of the world’s population already lives in cities and may people predict that will grow to two-thirds of the world population by just the year 2030 or 2035. And in Asia which is a microcosm if you will for this phenomenon worldwide, the populations are clustering around the oceans coasts. So we are much more a global urban coastal network civilization, right. In other words mankind lives on the ocean’s coasts in megacities on all the continents. That’s the correct way to understand who we are as a species. Not a world divided into 200 sovereign nations, some large some small, you know, some landlocked, some not. We as a species concentrate of coastal megacities. That is what we are doing. That’s what we have done. And so that has all sorts of implications because these cities rely very much on openness to trade. They depend on shipping. They depend on transportation. They depend on logistics and supply chains for food, for technology, for finance, for energy. You name it.

So it becomes a world in which openness and connectivity are absolutely paramount and in which rather than fighting wars over territory for the sake of having a larger territory it’s much more about insuring connectivity and supply chain so that all of the things, the good and the services and the money on which these cities depend will flow freely and openly. And that seems to be the way the world is going right now. There are a number of scenarios where this situation could be reversed. But the most profound of which is what happens as sea levels rise, particularly in the tropical latitude or the equatorial latitudes because that’s where the most number of people are and those people are living on the ocean’s coasts. So if sea levels were to rise as extremely as some scientists predict they might you would have coastal inundations of water. You would have surges. You may even have the necessity of people retreating inland from those cities. And so we would have to build secondary infrastructures. We would have to move to higher elevations in fact. And so the irony of becoming a coastal urban civilization at a time when sea levels rise is that this may be the worst time for us to be doing that because of the climate change and the sea levels rise that we have brought about.

How con artists manipulate your emotions in genius (and evil) ways