Nick Offerman is an actor, writer and woodworker, best known as the character of Ron Swanson on NBC's hit comedy series Parks and Recreation. His long list of film credits[…]
Go to Profile 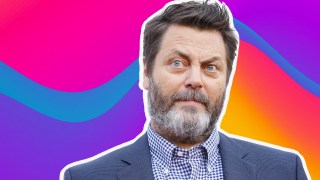 The world wants you to play it safe. Here’s why you shouldn’t.

Don't let others define your own path through life, says comedian and raconteur Nick Offerman.
▸
with
Nick Offerman

Nick Offerman doesn’t believe in having others define your path for you. Not everyone’s path has to be planned out in advance. Because if you look hard enough (and if you work hard enough), you’ll find others who can show you the way. Nick’s latest book is Good Clean Fun: Misadventures in Sawdust at Offerman Woodshop and you can pre-order his next book The Greatest Love Story Ever Told: An Oral History, too.

Nick Offerman: Our society has become so clickbait-y and superficial. It’s very seldom in interview situations that you’re asked anything of substance – the thing I get asked the most often is, “So tell us about this movie. Why should we go see it?” To which I always want to answer: Don’t go see it, go fuck yourself. I’m not like – that’s not my job to tell you why you should go see this movie! “Because you want to.” It just goes to show how lazy most media outlets are.

And so, ignore all of the channels. Ignore all channels of popular culture and focus on what you like and what you and your friends and/or family like. Because the stuff that I grew up that was like my weird bits that I did with my cousin and my sisters and brother, the stuff that I thought was weird of that stood out to me, I focused on that and through my theater training and then through my career it was always the counter culture weirdness that spoke to me. There’s a very specific group of us and we find each other and say oh, now we’re 47. Let’s make a TV show together.

And so by focusing, if you just consume what’s being fed to you then you never find out if there’s a really stinky cheese that might be your favorite thing to eat.

One thing that really attracted me to this script, I had worked on the previous film The Hero with Brett and his cowriter Mark Bash. But he makes these really thoughtful movies about humanity. And I loved when I read the script and there’s this element of the father-daughter relationship where they kind of take turns at who’s being the parent and who’s being the kid. And I thought that was really attractive and fun to play and realistic.

It’s a strange thing to see a kid want to go away and become a doctor and not only that but like we see her studying hard. She’s an erudite student. She’s very serious about where she’s going and yet she has this musical talent that she doesn’t take as seriously.

And to see the dad sort of saying, “Come on, I really want you to think about throwing away all your responsible dreams and run away and join the circus with me, your dad!”

In my own life I grew up in a very conservative small town in Illinois in a very conservative family. Every – it’s an amazing family of heroes. There’s about 30 of us now in this extended family and I’m the only one that doesn’t live within an eight mile radius. And every single family member is either farmer, school teacher, librarian, paramedic, nurse—and we have one craft brewer, my brother. He’s the king of the family.

But I’m the only one, and I always had this idea that I wanted to entertain people but I didn’t have the culture coming in to – I never learned of the channels by which I might achieve that.

And so when I was a junior in high school—and you had to begin to declare what do you want to do, where do you want to go to college if so. And it was pretty wild that I said, “I think I want to become an actor.” And the whole county was like “No, I don’t believe you can do that from here.” And I said “Well, but those other people must have come from somewhere.”

And really like all the channels, like the guidance counselor at school had a list of the 36 things you could study. And not only was actor not on there, there were no arts on there! The only one was musician. One guy from my town had gone to music school and he became a band director at a college. And so that was their precedent, and they said, “What do you want to do – go be a band director at a college?”

I was like no, I want to like make people laugh, or I want to be in movies and stuff. And so it was pretty crazy but here’s where some serendipity happened. I was with my girlfriend who was auditioning for a dance department at the University of Illinois. I met some theater students and I said, “What the hell are you talking about? You’re ‘theater students’?” And they said, “We study theater.” And I said, “Well then what?” They said, “You go to Chicago and you get paid to be in plays.”

And I said, “You’ve got to be kidding me. This is what I’m talking about!” I went home and I was like “Mom? Dad? I’m going to go do plays, and then I go to Chicago and they pay me to do plays! It’s a thing, people do it.”

And so that’s what I did, and my mom and dad were very supportive. I was somebody who had crazy ideas but I worked really hard. And they said, “You have some real cockamamie schemes but you always do your best. And so we’ll get behind you and support you in this.”

And it took several years—from age 18 to 26. Those are formative years. That’s a tough, scary time for your parents to say, “Okay, we’re going to trust you.”

But eventually when they first came to see me in a Shakespeare play in a very small part at a big theater in Chicago that was a big moment for me where I was like “Well, see, this is something! Three lines. There are people in this show with no lines. So just watch me.” And, you know, it’s something that – it’s a very personal thing, and you have to trust your gut.

The world is always going to want you to do other things that make them feel safe. Parents especially often have their own desires. And so to parents and children alike I would say, trust your gut.

Again if you’ve lived one of these lives where you are in a household where there’s not, people aren’t using tools or people aren’t that practical. There’s a lot of urban and suburban households where people say yeah god, when I get a flat tire I have to buy a new car because I don’t know what to do. Or if a light bulb goes out I have to throw the lamp away because I couldn’t tell you how that thing works. I don’t think I have the right tools.” To those households (of which there are many) I would say find a place to try making stuff. And there’s so many things you can do and another great thing about the information age or the proliferation of technology is that you can literally learn to do anything now on YouTube. You can become a blacksmith just from YouTube.

You’re going to learn a lot faster if you find a blacksmith to show you.

The best photos of Earth taken from space