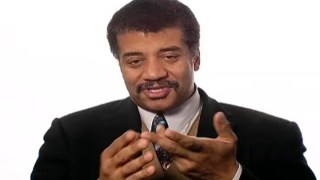 The astrophysicist puts on his “pure scientist” and his “American scientist” hat.

DeGrasse Tyson:    If I put on my pure scientist hat as opposed to my American scientist hat, pure scientist hat, I say, if we don’t build the land, somebody else will and the science will get discovered.  If we don’t explore the moons, somebody else will.  It will get discovered.  That’s one of the hallmarks of science that distinguishes it from art.  In science, if you don’t do it, somebody else will.  Whereas in art, if Beethoven didn’t compose the Ninth Symphony, no one else before or after is going to compose the Ninth Symphony that he composed, no one else is going to paint Starry Night by van Gogh.  So science, when done properly, is never owned by one nation or another.  So… That’s what happened with particle physics in America.  We were building the largest super collider ever was, the Superconducting Super Collider, to be based in Texas.  Two hundred mile circumference ring, we accelerate particles, smash them and explore the conditions that were common in the early universe.  That budget got cancelled by congress as we were winding down out of the Cold War.  So no longer was the physicist [IB] the way they were after the Second World War going into the Cold War because it was the innovations of physicists that created the bomb in the Manhattan Project.  Physics basically ended the war.  So, without a war, certainly without a Cold War, there is a question as to what the value of the Super Collider was to the nation.  Now, I don’t know how many people you get to admit that fact but my [read] of history is that when nations spent huge amounts of money on things, it’s hardly ever for the pure value of exploration, there’s usually secondary motives.  Primary motives that are presented secondarily like military, like economics or some other sort of factor that matters to national security.  So what happened?  Europe took up the task.  So, at CERN, which is the acronym for the super collider, the European consortion super collider in Switzerland, they now have the most powerful collider in the world.  They are the ones who are going to be probing the conditions near the Big Bang, not us.  So my pure scientist hat is I don’t care who does it as long it’s done, long as somebody does it.  The American scientist in me, ‘cause I’m born and raised in America and I care deeply for this nation, is I kind of prefer that we did it because I know we can.  If we weren’t wealthy or if we had… I’d say, you know, now is not the time.  Let some other wealthier, more powerful nation do it than us.  But is it time for me to say that?  Are we really that poor?  Are we really that… without means of a 3 trillion dollar budget to spend?  It’s about the balance of that portfolio of spending that makes a nation, how much do you spend on art, health care, poverty, research and development, the veterans, military.  You layout the portfolio, that is the country that you live in.  Three trillion is enough to buy, as far as I’m concern, anything we want, anything we choose to.  And so, I wish it was here because if we make it here, the opportunities arise here, the engineering opportunities, the engineering solutions to problem we never seen before, that then create a climate, a landscape of innovation that… I remember growing up, America had, like, the longest bridge, the longest tunnel, the fastest planes.  And for awhile there, I thought, well, it’s just [bragging] rights, what are you doing.  And then, I realize, in order to create the extremes of these technologies, you have to innovate.  You can’t just step there, it’s not… it’s hardly ever just make it a little longer.  This was longer so it’s more stress on the structure, there’s… so we have to invent something new to accommodate this need or this desire.  And there, [you know,] the seeds of innovation