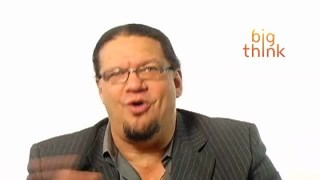 Mistrust of Government Is a Beautiful Thing

The magician explains his libertarian beliefs and why President Obama should be “questioned and beat up.”

Question: Why is it important to mistrust the government?
rn
Penn Jillette: I believe that our country, uniquely for rnthe time, was founded on mistrust for the government, which is such a rnheady and beautiful idea. The idea that we have all the rights in the rnworld. We have complete and utter freedom and we give up very specific rnfreedoms in order to have a government that will protect the other rnfreedoms.

Such a profound idea and so deep, and so wonderful. Andrn I think that it was so weird to see all the people who said that rndissent was part of their job during the Bush Administration turn aroundrn and say that we were all supposed to rally behind Obama. I mean, I rndisagreed with Bush and Obama tremendously... and on the exact same rnissues. And the only issue that really matters to me is wars and killingrn people overseas. I'm against them... and I was against them when Bush rnwas doing it and now that Obama is doing it more I'm against it too. Andrn I think that it's part of the joy and the wonder and the brilliance of rnthe ideas of the United States of America that whoever is in power is rnquestioned and beat up.

I was asked... and I'm going on the Joy rnBehar Show later today and you get questions ahead of time, unlike here.rn They lay stuff on you ahead of time. And it was Obama said he wants to rnfigure out whose ass to kick and that before he was busted for being notrn emotional enough—too cold. And now he's being busted for being too rnstraight. How can he win? And my answer is: he's not supposed to win. rnHe's the President. They're supposed to be millions of people rndisagreeing with him on everything and busting him on everything.
rn
rnThat's the way the country is supposed to work, and that's not somethingrn to bemoan the fact that the government can't rally everybody to work rntogether. That's to be celebrated. The government being is hamstring andrn as closed off and as clumsy as possible is exactly what we want. The rnlast thing we want is a government that can get things done. A rngovernment that can get things done all they will get done is taking rnaway freedoms. Its been shown over and over again. We want a clunky, rnsloppy, slow-moving, small, insignificant, weak government there all thern time. And that's a government we can love and protect.

rnQuestion: What is the biggest misconception people have about rnlibertarians?
rn
Penn Jillette:  Well it's the same misconception that rneverybody seems to have about everyone else and it's the same rnmisconception libertarians have about liberals or conservatives have andrn that is we sometimes tend to forget that everybody is trying for the rnbest. Everyone's goals are the same with very small differences. I mean,rn the goal of a socialist and the goal of a libertarian are exactly the rnsame. The goals are happiness and security and freedom and you balance rnthose.

But I think the biggest misconception that I find about rnlibertarians is that there's a lack of compassion and I think that therern is as much compassion on libertarians as there is among liberals. It's rnnot what the problems are, it's how to solve them. Everybody wants rnclean, safe, energy. Some people think nuclear is the way to go. Some rnpeople think coal is the way to go. Some people think wind is the way torn go. And there's always balances on that. Libertarians tend to put rnfreedom as a goal in itself and also a way to attain other goals. rnLiberals tend to put security as a goal in itself and a way to obtain rnother goals.

I think the biggest misconception is that rnlibertarians... I guess the cliche would be don't care about the crack rnbabies. I just think you can deal with people in trouble using rncompassion. One of the things that bothers me about statism is that theyrn take away my compassion. When you take money from me by force, run it rnthrough the government to help other people... I think there's less rncompassion than me being able to do something. What I say about rnlibertarians verses liberals is I will gladly help you build a library; Irn will not use a gun to get someone else to join us in helping to build rnthat library.

I want credit. I want credit for helping. I want rnto feel like I'm helping and giving money to the government does not rnseem like the best way to help and forcing other people to give money rnthe government seems immoral to me. I think that if I want to cure rncancer I should work on curing cancer. You can't force other people to rngive money to cure cancer then you're not really helping or you're rnhelping in a way that I don't think is right. So the question on health rncare was not if you saw someone laying in the street who needed help rnwould you run over and bandage them. The question is really if you saw rnsomeone suffering in the street would you run, get a policeman, have rnthat policeman find a doctor, have that doctor forced by everybody rnaround to take a vote and then come in and help.

But I think rnthat it's forgotten that what everybody is trying to do is help the rnpeople that need it. Everybody is trying that and I will say that about rnevery political group and I think that I would love to see people using rnthe word "wrong" more and using the word "evil" less. Obama is a really rngood guy, a really smart guy, and every moment, every second of every rnday is spent trying to do what's best. I disagree with him. But there's rnno sense that he's evil and this is something I'll say that a lot of rnpeople will freak out at. I think the same was true for George W. Bush. Irn think every second he was trying as hard as he could to do what was rnbest. I disagree with him very, very, very intently—but that's back to rnthe fundamentalist atheist thing.

To be able to say "you're rnwrong, and here are the reasons," is respect. To say "you're evil" is rnantihuman because the people that I've met in my life who were truly badrn and are truly evil is such a small number. I mean, if you take the six rnbillion people on the planet and round off the numbers about six billionrn are good.

Why Tolerance Is Condescending