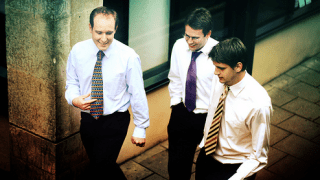 Nomi Prins explains the workplace warrior complex and how a certain playground bully mentality is connected to reckless deregulation.

Question: What happens to men when they become powerful?

Nomi Prins: I think men in power tend to be associated with each other, for the most part. And so this idea of a big, swinging dick, as Michael Lewis would say, is a sort of swagger mentality, this fight, this “I’m going to achieve,” and it tends to be very militaristic as well. It’s competition, it’s a war, it’s being a warrior, it’s all these other types of metaphors for what happens within a, particularly a Wall Street firm, in terms of a lot of corporate America, but particularly on Wall Street, because that’s where the stakes are so much higher. There’s more money involved and therefore, there’s more power and therefore, there’s more fight. And that tends to be considered more of a masculine thing. Whereas a woman fighting doesn’t sort of have that same historically warrior type of quality in general and so it doesn’t really give women the same kind of a label that it would give men. Being a bitch might be something that a woman who is fighting a lot internally might receive, but it’s not the same thing as a man moving up the ranks and sort of being considered, you know, that warrior or that swagger, that power player.

Question: Do you feel that this attitude has led us toward the financial crisis?

Nomi Prins: Well, it’s like kids in a playground, it’s sort of like there’s these, there’s sort of a bully mentality, which is that, except it manifests itself in money and in power and in lack of rules and lack of regulations that enable a particular bank or a particular type of trading to be really profitable and sort of propel up the people that are in charge of those parts of the bank and those parts of the profit up the food chain. And even into the financial world heads and then also into Washington, where a number of power players from Wall Street have found themselves. Henry Paulson, for example, our former treasury secretary, was a CEO at Goldman Sachs. Robert Ruben, who was the treasury secretary under President Bill Clinton was a CEO, or post CEO at Goldman Sachs. So it’s this idea of sort of moving up and moving out and continuing to sort of get power that’s really a part of the entire process of Wall Street and towards Washington.

So, You Wanna Work on Wall Street?