Mary Lou Jepsen was recently named one of the hundred most influential people in the world by Time Magazine in May 2008 for her work in creating Pixel Qi, and[…]
Go to Profile 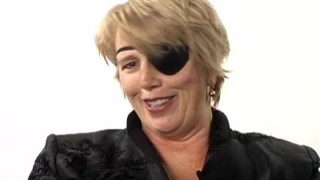 Jepsen:  Well, for us I actually was told by one of the largest manufacturers in the world that it would cost $30 more for the laptop to be environmentally friendly and I thought that’s just too much money.  We’re not going to do it.  And they were wrong.  We’ve made the most environmentally friendly laptop ever made and it was by trying to do, trying to design for the developing world and for children.  The batteries can’t explode, right?  I mean pick your company.  They have recalls about every six months of millions of batteries that are exploding using lithium ion technology and so we explored different technology and batteries that would last much longer.  The typical lithium ion battery lasts some 500 charge/recharge cycles, which is if you’re running off a battery all the time, a year or a year and a half, two years.  Well, ours lasts 2,000 charge/recharge cycles and so that’s like five years, right, even if you’re running off a battery all the time and lithium ferro phosphate which we use as well as nickel metal hydride, lithium ferro phosphate actually with processing decomposes into fertilizer.  Now people are still sort of working this out because this is a new technology but those are the components of fertilizer so that’s pretty great.  The reason that the OLPC laptop sort of got the title as the greenest laptop ever made was multi folded but much of the-- we rode the EU’s sort of legislation for reduction of hazardous substances so all of the factories of the world were retooling so that they could ship to the EU, so the EU legislation really made a profound difference for that.  But in addition, we got rid of the mercury, which wasn’t required but we used an LED back light so that was really great as far as hazardous substances.  But then you’re left with things that aren’t really measured in the current way people measure greenness, like they say they mandate energy star compliance but the XO laptop is 15 times better than energy star compliance mandates, which you think well they don’t sort of set the bar high enough, like people could do more.  I talk to people and they say, “Well, how do you legislate that?  Everybody can’t do it.”  I mean how do you legislate that?  That’s a question but also some of the requirements for it there’s a spec that’s called IEEE1680 2006 and IEEE it doesn’t really matter what it stands for.  The E’s in it are electrical engineering and it’s the largest electrical engineering society in the world and they came up with sort of a standard for what environmentally friendly laptops and computers should be.  This organization said, “Okay, we’re going to make that into a sushi card and you check if you can do each thing and if you get enough checkmarks you get this gold award.  Well we got that but it doesn’t even count how long the product lasts.  Does the laptop last two years or five years or what the footprint is.  What’s the size and weight of it.  How much of this would end up in landfill?  Like those aren’t counted even in this and so I think that there’s a lot more that can be done but the question is really do you regulate it or how do you incent it because if you set these bars they’re probably not hard enough.