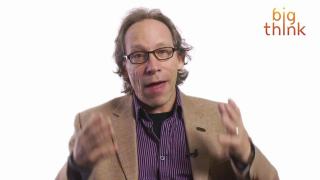 Lawrence Krauss: The Flavors of Nothing

Theoretical Physicist Lawrence Krauss explains the different types of nothing. Or something.

For example, the simplest kind of nothing is the kind of nothing of the Bible. Say an infinite empty space, an infinite dark void of the Bible. You know, nothing in it, no particles, no radiation, nothing. Well, that kind of nothing turns out to be full of stuff in a way or at least much more complicated than you might have imagined because due to the laws of quantum mechanics and relativity, we now know that empty space is a boiling bubbling brew of virtual particles that are popping in and out of existence at every moment.

Create spaces and times, where there was no space and time before. So now you got no particles, no radiation, no space, no time, that sounds like nothing. But then you might say, well, you know what, you got the laws of physics. You got the laws of nature. The laws themselves are somehow something; although, I would argue in fact that that is not at all obvious or clear or necessary. But even there, it turns out physics potentially has an answer because we now have good reason to believe that even the laws of physics themselves are kind of arbitrary.

There may be an infinite number of universes, and in each universe that's been created, the laws of physics are different. It's completely random. And the laws themselves come into existence when the universe comes into existence. So there's no pre-existing fundamental law. Anything that can happen, does happen. And therefore, you got no laws, no space, no time, no particles, no radiation. That's a pretty good definition of nothing.